Bringing the ’80s hair of Stranger Things to life is no small feat, but it’s one that Sarah Hindsgaul, Stranger Things‘s hair department head, has been doing since the show’s very first season.

Hindsgaul, who is nominated for Outstanding Period and/or Character Hairstyling at this year’s Emmys, came to Stranger Things after having worked as the hair department head on HBO’s Show Me A Hero, whose ensemble cast included Winona Ryder. Ryder showed Hindsgaul the lookbook for Stranger Things, and Hindsgaul was immediately intrigued.

“The lookbook was pretty amazing. It just had so much character in it,” Hindsgaul told Mashable in a phone interview. Like much of Show Me A Hero, Stranger Things takes place in the ’80s, and Hindsgaul was eager to take a crack at another period show.

Stranger Things creators Matt and Ross Duffer had also been impressed by Hindsgaul’s work on Show Me A Hero. “[The Duffer brothers] said, ‘We really love that show, and we love that it all looks natural. We love that you didn’t use any wigs,'” Hindsgaul recalled. “And I was like, ‘They’re all wigs!'”

The same goes for Stranger Things, which is an extremely wig-heavy production. Over 250 wigs were used in the show’s fourth season, with principal characters having at least three wigs, including ones for fight scenes and water work. Stunt doubles also required their own sets of wigs.

Since Stranger Things is a show with such a massive cast, Hindsgaul also kept 50 wigs on standby for day players with smaller roles so she could fit them quickly. Some wigs did double or even triple duty, appearing on multiple characters. According to Hindsgaul, she used the same wig for mom Karen Wheeler, bully Angela, and Steve’s date in Stranger Things 4‘s first episode, styled differently for each character.

Hindsgaul broke down even more Stranger Things hair secrets for Mashable, including how she achieved specific looks like Eleven’s buzzcut (which is also a wig!) and Eddie Munson’s iconic mullet.

Perfecting the ’80s look for TV 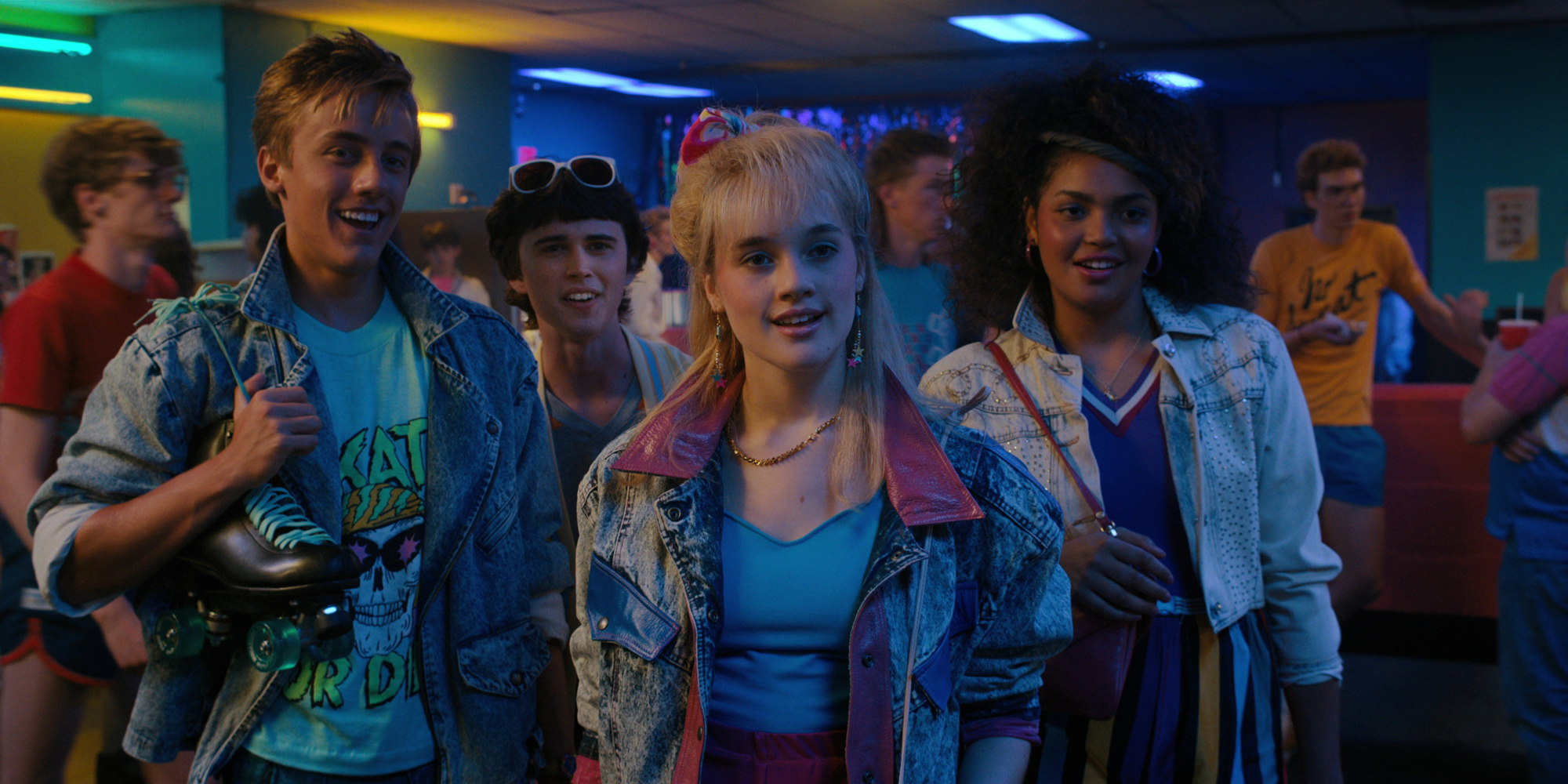 From perms to mullets to bowl cuts, the ’80s stylings of Stranger Things are very distinctive. However, Hindsgaul’s main focus in creating era-appropriate looks was to make sure that the hair looked appropriately lived-in. For that, movement and texture were key.

“I like hair that moves. I like textures, and I love when you feel that it is realistic, even though ’80s hair is quite ridiculous,” said Hindsgaul. “How do you take something that becomes very stiff, very set, and give it the height and the volume and texture that it needs, but also make it fluid and natural?”

‘Stranger Things’ and the power of being seen

Through it all, Hindsgaul wanted to make sure the hair read as naturally as possible on-screen. This meant, especially for the Hawkins high schoolers, not having hair that looked too perfect.

“I like to keep them still awkward in it… When we’re at that age, and especially with our little band of kids, it’s important that they’re real,” Hindsgaul said. “I don’t want them to look pretty for the sake of being pretty. Who of us looked pretty at that age? You don’t have enough together. It’s important that our young audience can relate to them. This could be you, this could be me. I was there, I was that person, I was going through that. It’s such an emotional stage in your life.”

Hindsgaul pointed to Max’s simple ponytail in Stranger Things 4 as a reflection of this. She nicknamed the look “the sad, sad ponytail” in reference to Max’s grief throughout the season. “We really need to have the grit, we need to have some flyaways,” said Hindsgaul. “That is what makes [the show] creep under your skin.”

She added: “I don’t ever want to feel like there’s hairspray in anybody’s hair. Unless it is Cara [Buono, who plays Karen Wheeler].” 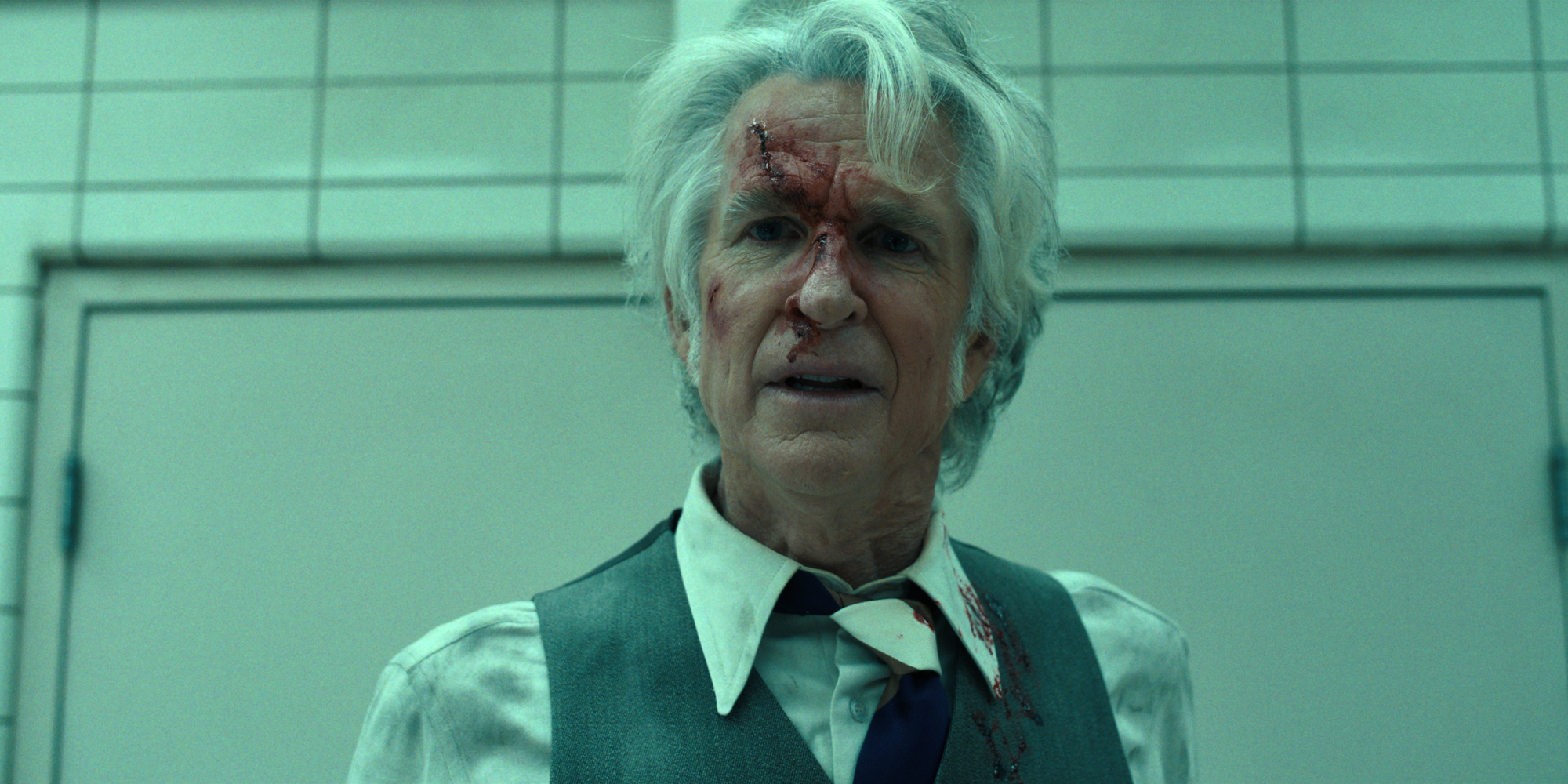 Dr. Brenner went through a lot this season — a lot of wigs, that is.
Credit: Courtesy of Netflix

One of the biggest challenges Hindsgaul faced this season was creating three different looks for Dr. Brenner, who we see in the ’80s and in flashbacks to the ’70s and ’50s. For the ’80s scenes, Hindsgaul bleached actor Matthew Modine’s hair to create his signature white coif. She also added a few extra hair pieces to his head in order to keep the look’s rigid shape.

Things became more complicated when it came to developing Brenner’s hair in the scenes that take place years, sometimes decades, earlier. For the ’70s scenes in particular, Hindsgaul gave Brenner salt-and-pepper hair, which meant she had to think about the rate at which Brenner’s hair would have gone white. She factored in what Brenner’s stress levels may have been like, and she also looked at pictures of Modine to see how his hair has changed over the years in order to maintain a natural feel. Think of it as time travel, but with wigs. 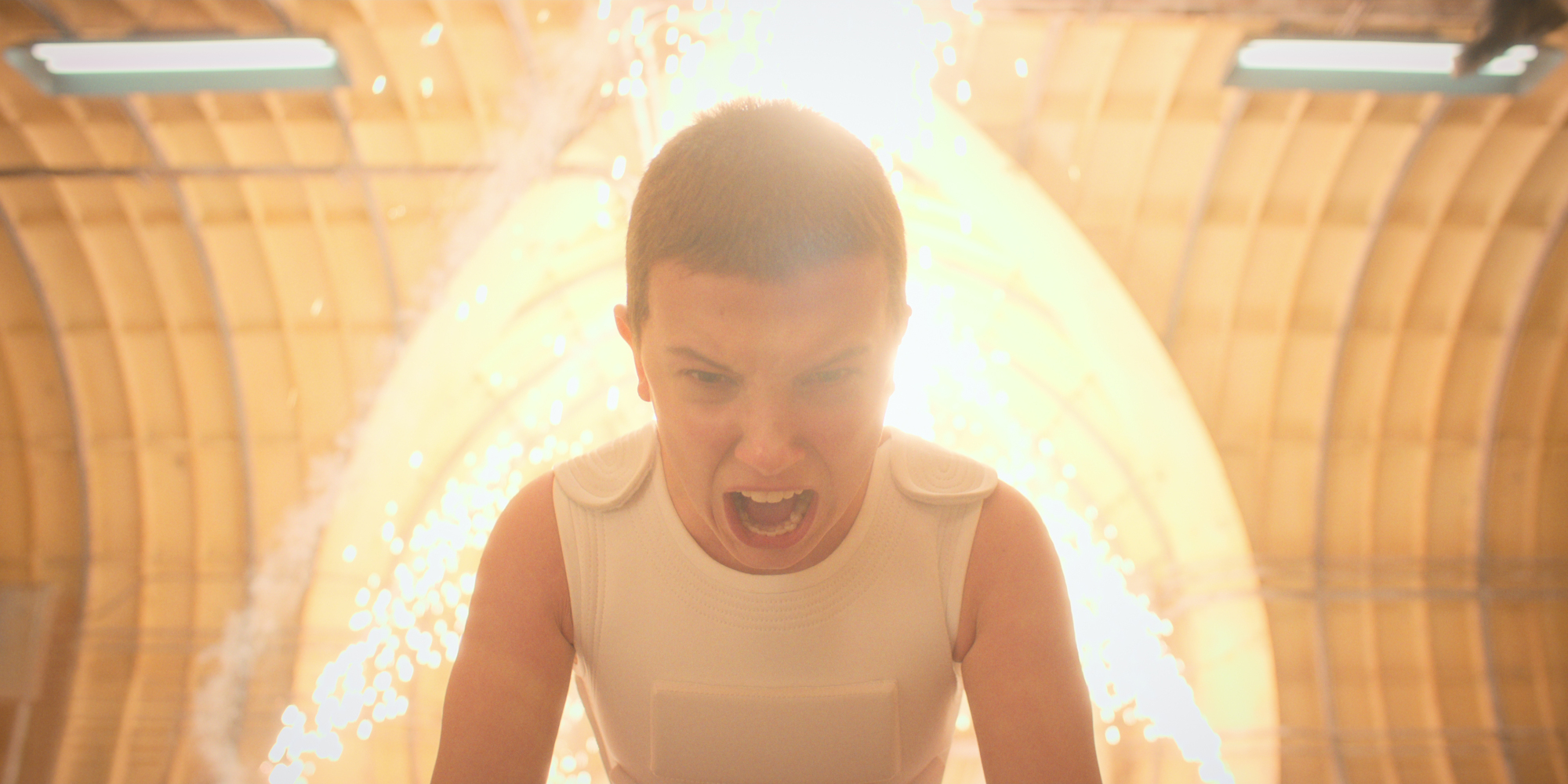 That buzzcut? It’s a wig.
Credit: Courtesy of Netflix

Speaking of time travel, Stranger Things 4 brings us back to Eleven’s time in Hawkins National Laboratory. With those flashbacks, we get the return of Eleven’s iconic Season 1 buzzcut, with one big change: This time around, it’s a wig.

That’s right. Actor Millie Bobby Brown did not shave her head again for this season. Instead, Hindsgaul and her team recreated her buzzcut, resulting in a kind of wig that’s never been done before. 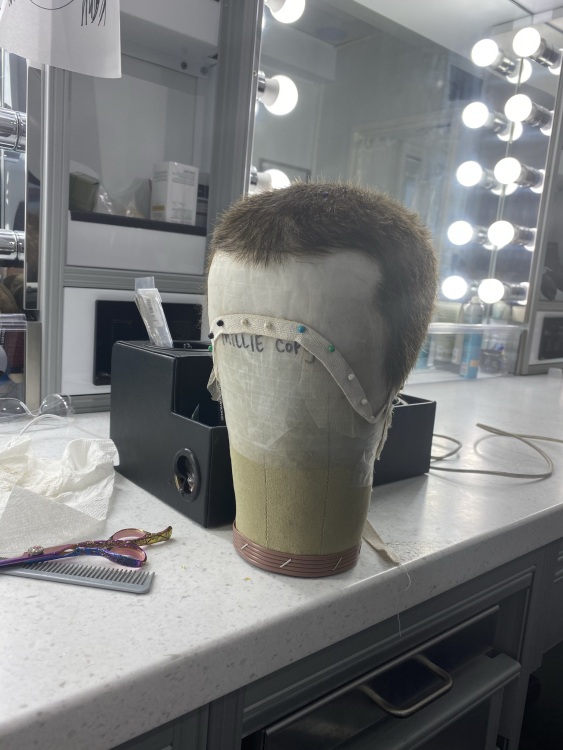 “I’ve always been told in my career that you can’t do wigs that short. It’s not a possibility,” said Hindsgaul. “But I’ve worked with Millie for so many years. I know her head shape really well, I know her hair lines, and I was like, ‘I think I know where to put her hair.'”

Hindsgaul estimated that she spent about 8 to ten hours cutting a long wig down to a short enough length, saying that she had to cut it hair by hair to make sure the lace on the wig didn’t fall apart. After that, she added dyed silk to the wig to match Brown’s skin and hair color so we couldn’t see through the wig. Because of specific rules for child actors, Hindsgaul also had to make sure that the entire wig application process could be done in 30 minutes or less. Hindsgaul and her team were able to get the application process — which involved wrapping Brown’s head and applying the wig to her head in separate pieces — down to 20 minutes.

For Hindsgaul, one of the biggest challenges was also keeping Eleven’s hair this season consistent with her hair in Season 1. “It had to look exactly like Season 1, because [Eleven] also has one of the most famous buzzcuts in the world. Everybody knows what she looks like with a buzzcut. They know how it falls, so we couldn’t change that,” she said. Just like with Dr. Brenner’s looks throughout time, this need for consistency meant studying early photos of Brown. She also sent these photos to wigmaker Rob Pickens and ended up flying him in so they could collaborate on the buzzcut wig together.

Check out the wig creation and application process below, in a video from Hindsgaul: 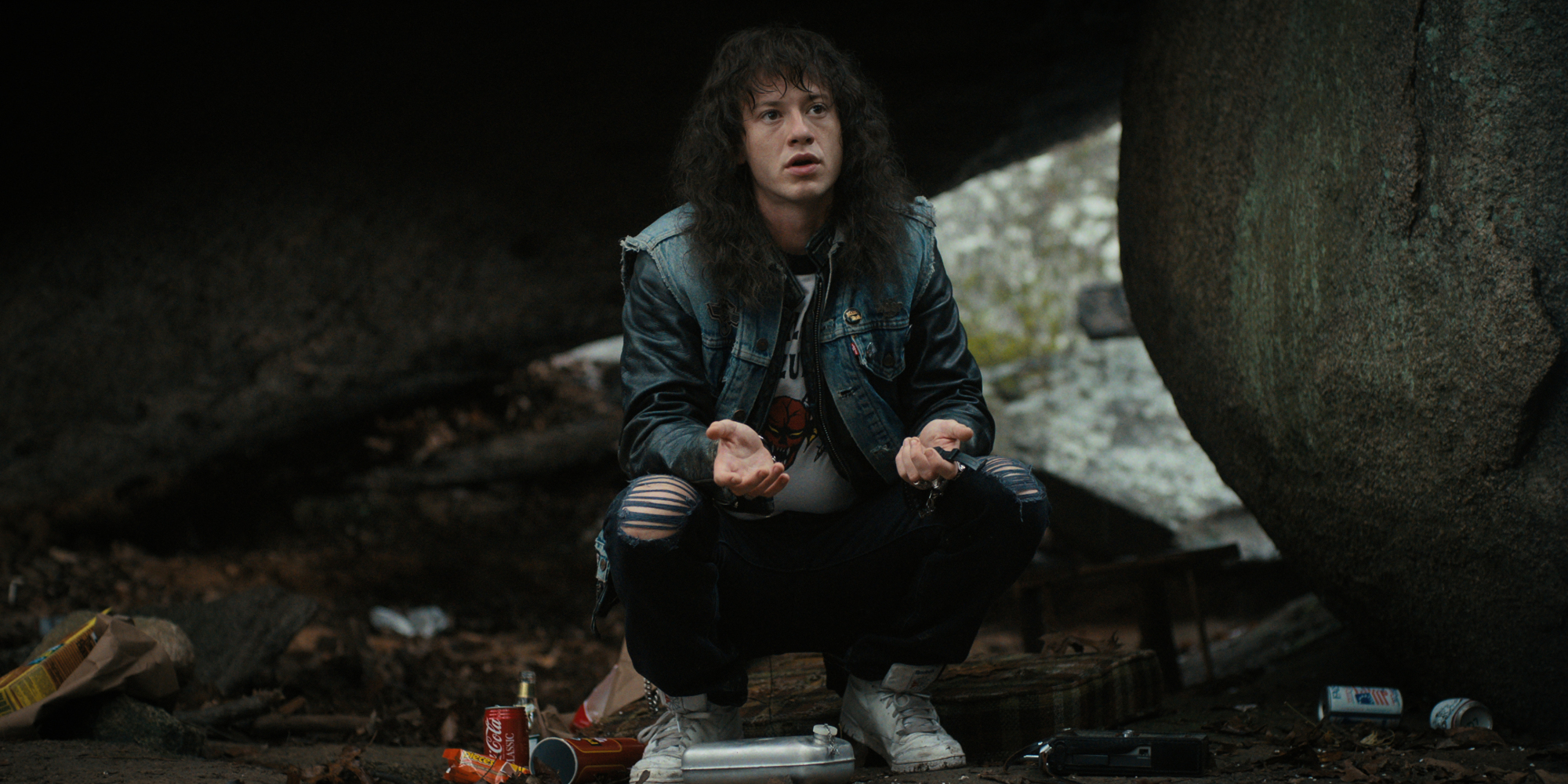 Eddie was gone too soon, but we’ll always have that glorious hair.
Credit: Courtesy of Netflix

Eddie Munson instantly became the breakout character of Stranger Things 4, and his distinctive look definitely helped cement that status. However, his shaggy mullet — inspired by rock metal legends like Eddie Van Halen — underwent a lot of iterations before it became the final product we see in the show.

Originally, the Duffer brothers wanted Eddie’s hair to be black, but once actor Joseph Quinn was cast, Hindsgaul wanted to find a shade and texture that would be more flattering on him. She estimated that Quinn went through five or six wig fittings, and that she took more time layering his wig because once you remove volume, you can’t add it back. She also spray painted it several different colors in order to make sure she achieved the perfect color.

Forget Eddie, this ‘Stranger Things 4’ character was the real MVP

“We kept going until I could see Joe lighting up, and he started touching his hair. He started moving it, and I was like, ‘Oh, we’re getting there,'” Hindsgaul said of the fitting process.

She added, “I think he did a great job of using [the hair]. He really got into it. Normally, when we do the wig tests, I make the actors jump and run and shake their heads, and Joe was headbanging.” 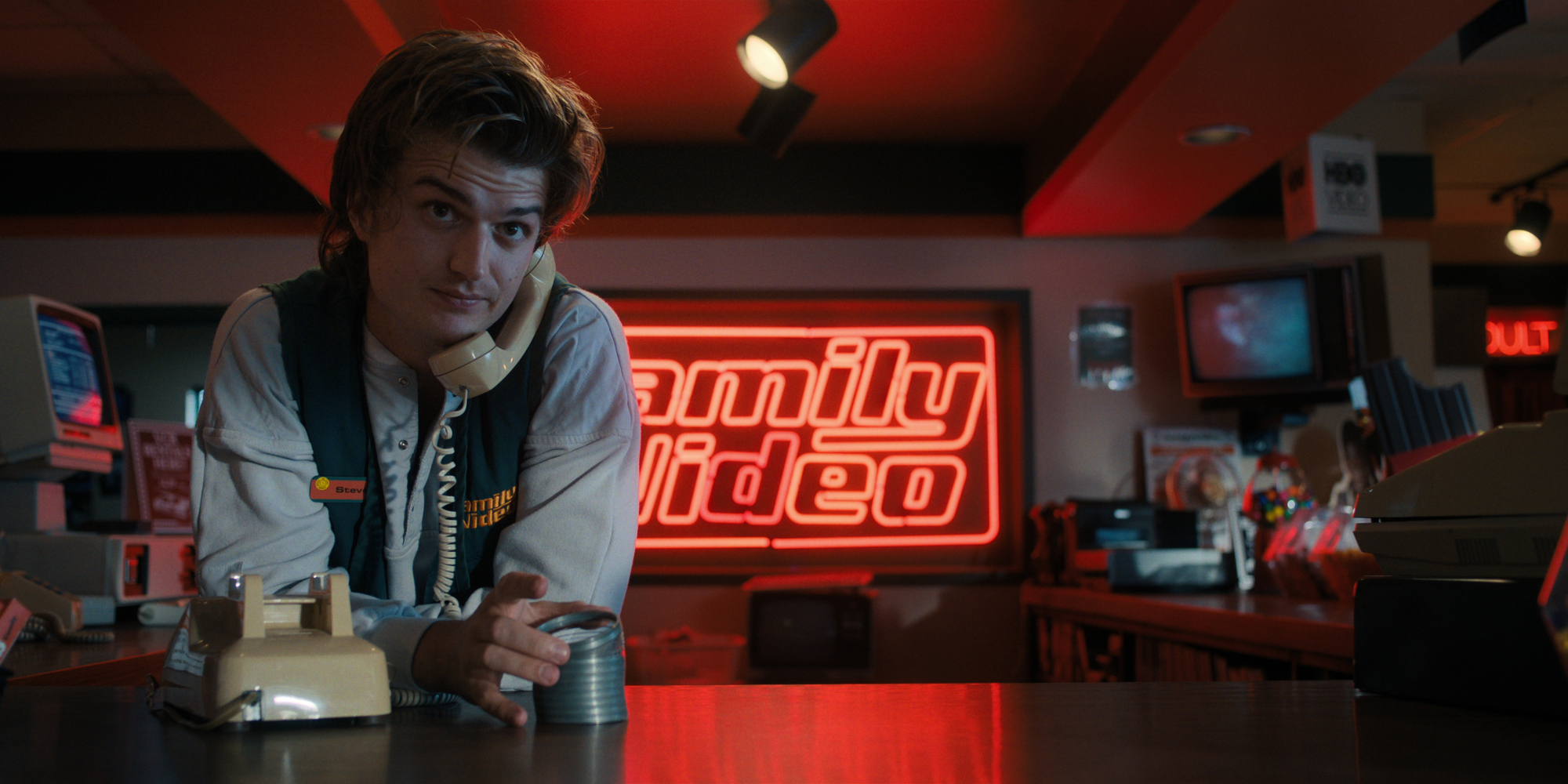 It takes a lot of work to get Steve’s hair just right.
Credit: Courtesy of Netflix

We can’t talk about hair in Stranger Things without briefly mentioning Steve Harrington’s legendary bouffant, which seems to grow in power from season to season. Actor Joe Keery is one of the few people not wearing a full wig in Stranger Things 4, although there are some extensions in the back. Instead, to get the volume that Steve’s hair requires, Hindsgaul uses a technique she calls “the cat paw.”

“We put products in [his hair] and then you squeeze like a cat.” Hindsgaul demonstrated by kneading her hand just like a cat paw. “I get all the texture into it and dry it hard into his hair so we get that wave texture. Otherwise, it gets really straight.”

“The cat paw” became a shorthand term on set. Hindsgaul said that if someone other than her was working on Keery’s hair, she’d just ask them to do “the cat paw” and they’d understand. So the secret to Steve’s glorious hair isn’t just four puffs of the Farrah Fawcett spray, as Steve tells Dustin in Season 2. It’s also cats.

Fans are wigging out

At the time of this writing, Hindsgaul has over 628,000 followers on Instagram, where she shares behind-the-scenes looks at all her work. From videos of wig tests to time-lapse videos of styling wigs, it’s a real deep dive into the hair of Stranger Things.

For Hindsgaul, the fan reaction — which has been especially intense this season — has been gratifying. “It’s the most touching thing to have ever happened, to tell you the truth, to see how excited people are about the hair,” said Hindsgaul. “I get so many messages every day from young people who want to know how they can get started on doing hair in movies.”

“What you normally see when you’re watching a film or a television show is the actors, so everybody is like, ‘I want to be an actor,’ because you don’t think about the 350 jobs that go into the other side of it,” Hindsgaul continued. “So over the years, it’s been really, really interesting that most of the messages I get are are from young people who want to know how they can get into learning how to do wigs and get behind the scenes. That’s so touching, that makes me so happy.”

Spiritual Energy Downloads – What Are They And How Can You Access Them!?