Hi, my name is Cecily, and I’m a jaded millennial who feels pushed out of her comfort zone by Samsung‘s latest influencer-friendly folding phone, the Z Flip 4.

As an “old” person whose first mobile phone experiences included painstaking T9 text entry, ringback tones, and lots of snake, I mostly just care about a phone that’s speedy and reliable. But that’s every smartphone now, even the budget ones: You get powerful chips, tons of storage, state-of-the-art cameras, and high-res displays. So all that’s left to innovate on are… aesthetics?

From the looks of the Z Flip 4 (and its BTS-focused marketing), that seems to be the case. Unlike the Z Fold 4 which aims to replace the tablet as a 2-in-1 foldable (and does it well!), the Z Flip 4, with its clamshell design reminiscent of early cellphones, provides a solution to a problem that doesn’t exist. It’s innovation by way of nostalgia. And it’s adorable.

I had a lot of fun with the Z Flip 4 and I enjoyed playing around with shooting and editing features, tailor-made for Gen Z creators, that make posting content to social media significantly easier. But with a $999 price tag, it all comes down to whether its novelty and flashy colorways appeal to your aesthetic.

First, here’s what you’re getting:

Nostalgia is a helluva drug 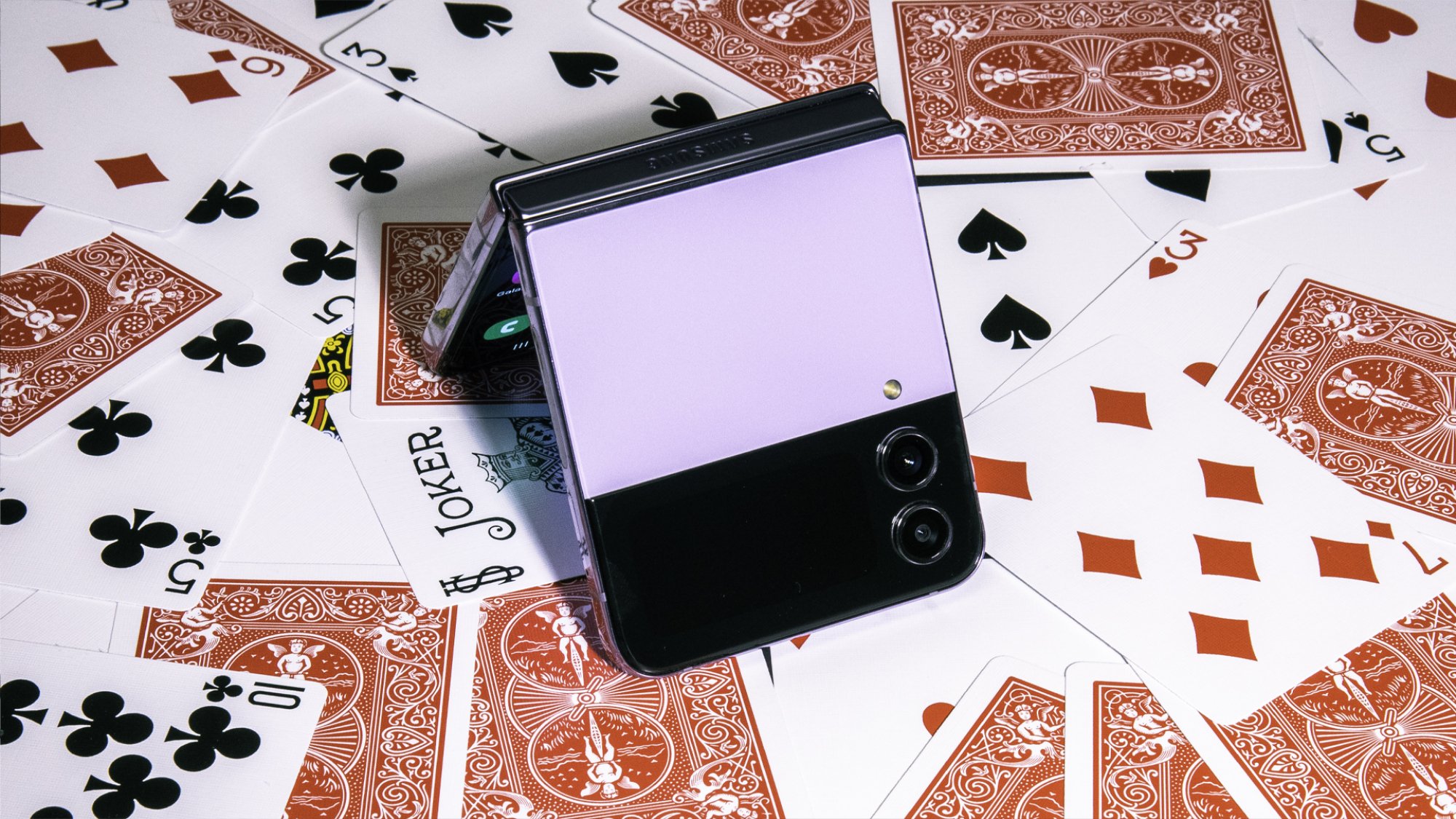 Gather ’round children for a tale from ye olden days. It was the early 2000s and Paris Hilton was on top of the world as well as the cover the US Weekly almost every week. Permanently in her grasp was the cellphone du jour. Sometimes, it was a hot pink Motorola Razr. Other times, it was a bedazzled LG 8700 Shine. There was even a nifty device called the T-Mobile Sidekick, which had you turn your phone horizontally to type. The message was clear: Phones were the new status symbol.

And that seems to be the case again. With the recent resurgence of Y2K trends, Samsung now has Gen Z, who are obsessed with this period and the millennials who lived through it the first time, in the palm of its hand. As Mashable culture editor Crystal Bell noted: “There’s a reason Samsung unveiled the device with a special music video starring international superstars BTS.”

There are some trends from the early 2000s — e.g., low-rise jeans, chunky highlights, so much ruching — I’d care not to relive. But bringing back colorful flip phones is kind of delightful. The Z Flip 4 model I tested is outfitted in a playful pastel shade called bora purple, but the device also comes in graphite, pink, gold, and blue. Purple isn’t really my color of choice, but it immediately reminded me of the days when Hilton would coordinate her phone with her outfit. That’s not really my style, but I respect the commitment to a lewk, so I get the appeal. 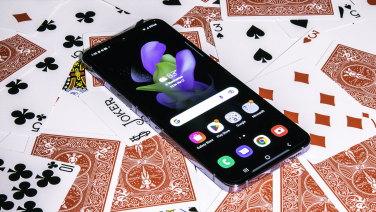 From here, it looks like a regular phone…
Credit: Kyle Cobian / Mashable 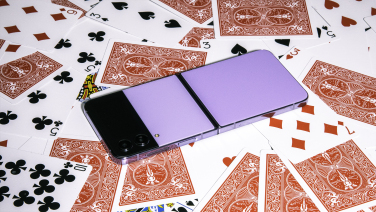 The Z Flip 4’s 6.7-inch inner AMOLED folding display, which is the same size as the iPhone 13 Pro Max, isn’t anything new — this is now Samsung’s fourth iteration of the Flip. But thanks to a wider array of useful cover display widgets and features plus the ability to do more with the dual screen form factor, switching over to the compact Z Flip 4 is now a much more compelling choice. 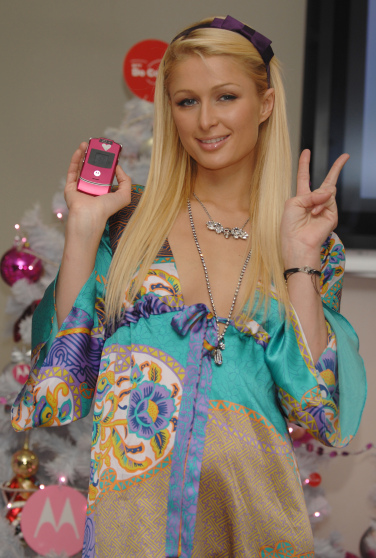 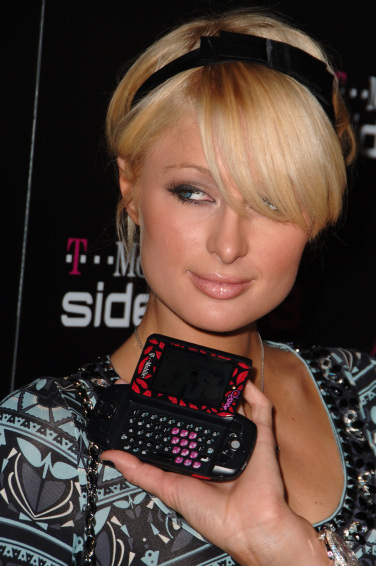 The next phase of Y2K nostalgia should be bringing back the Sidekick.
Credit: Getty Images

When I first received the phone, one of the first things I did was try to snap it shut with one hand. I craved the thrill of dramatically ending a call like we all did in the flip phone days. But, unfortunately, the Z Flip 4 doesn’t really allow for that. Due to its size, the Z Flip 4 is hard to close with one hand. It’s not impossible, but you have to kind of bear-claw it on the sides to snap it shut.

Hey, Samsung, some unsolicited advice: If you’re going to lean into the nostalgic flip phone design, maybe make the Z Flip 4 even smaller and more compact.

You can keep it closed

That being said, a smaller Z Flip 4 would probably hinder some of the cover screen features, which are among my favorite aspects of the phone. The cover screen has always been a key selling point of the Flip, but previous models hadn’t quite perfected it.

Now, with an option use the cover screen camera with true aspect ratio and a new portrait mode feature, it’s actually a practical way to shoot photos and video. It still has the same 12-megapixel wide and 12-megapixel ultra-wide rear cameras (as well as the same 10-megapixel front-facing camera) as the Flip 3. But a better pixel sensor and enhanced stabilization makes photos and videos look smoother and crisper. 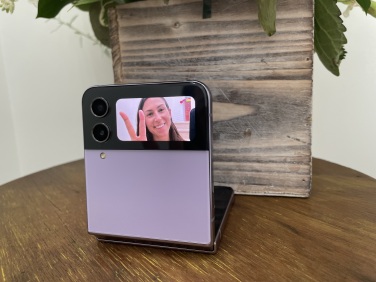 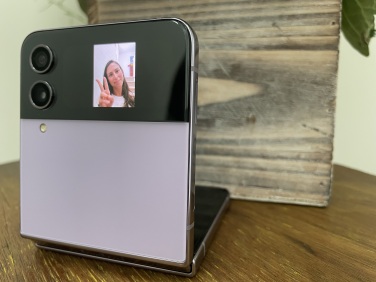 Actual ratio mode is a critical addition for anyone who doesn’t want to see themselves that close up.
Credit: Cecily Mauran / Mashable

The Flip 4 also has enhanced widget features, namely, the ability to access and respond to messages straight from the cover screen using quick suggested replies (which can include voice messages and emoji.) This might even make some people check their phone less, by diminishing the need to pick up and unfold the phone. Typically, I have to put my iPhone face down to avoid distracting notifications, but the Z Flip 4’s cover screen is subtle enough that I didn’t get sucked into checking endless alerts while working or grabbing dinner with friends. If it was an important message, I could shoot off a quick reply in a few swipes without even opening my phone.

With a heavier focus on Reels and more video content, it’s no secret Meta is desperately trying to be more like TikTok. And to further that pivot, Instagram head Adam Mosseri made a guest appearance at Samsung Galaxy Unpacked earlier this month to announce the app’s compatibility with the Flip 4’s FlexCam, aka hands-free photo and video capture, and Flex Mode, or dual-screen multitasking. 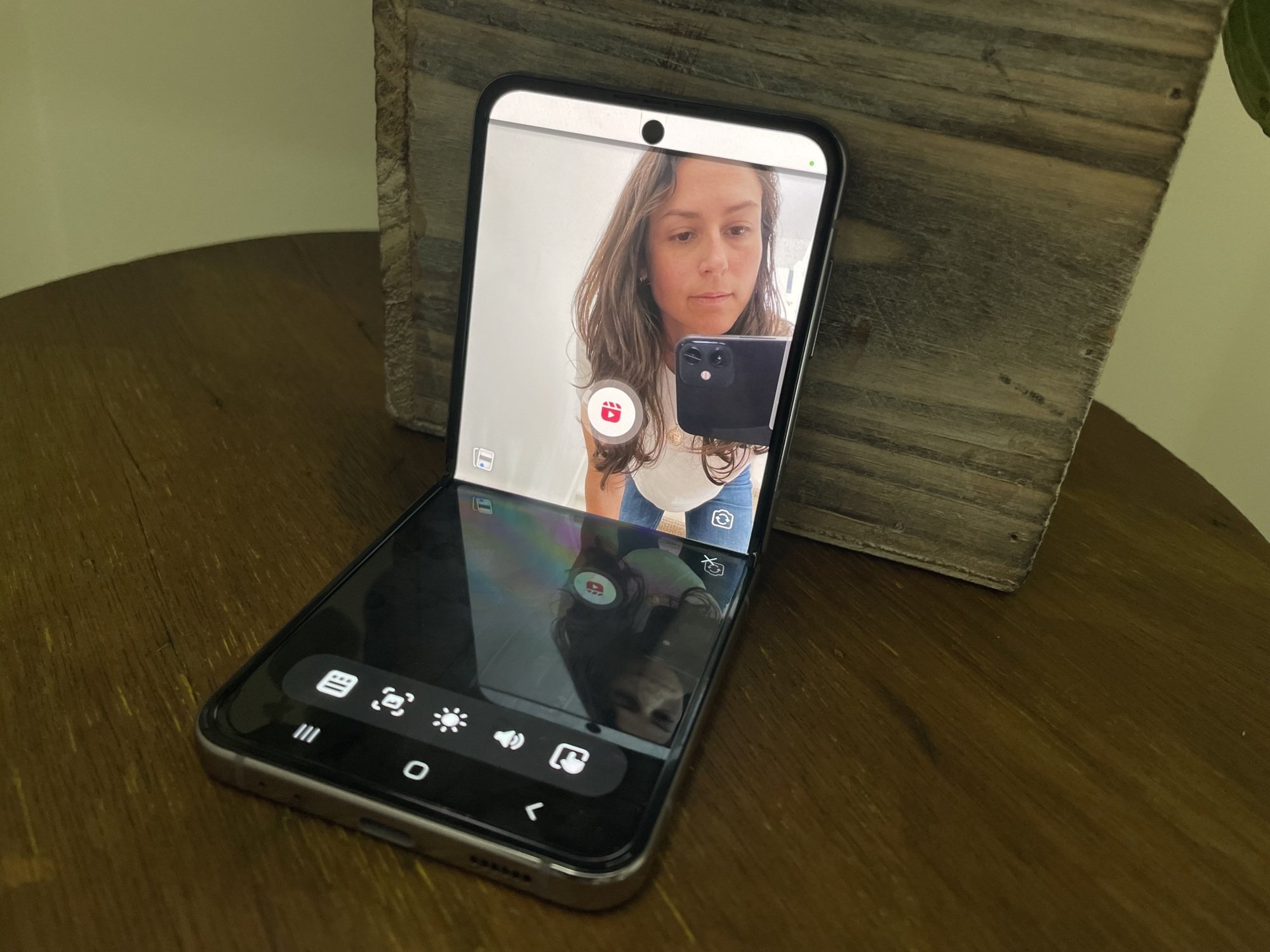 When either Facebook or Instagram are open on the device, folding the phone to a 90-degree angle will activate hands-free recording for Stories or Reels. You can also make hands-free video calls with WhatsApp and Messenger, too.

Similar to FlexCam, Flex Mode is another dual-screen feature that allows you to use the bottom half of the screen as a touchpad. Essentially, this mode turns the Z Flip 4 into a mini-laptop. Flex Mode was already available on the Z Flip 3, but the native UX has been improved thanks to better integration with third-party apps like YouTube and Google Meet, and enhanced touchpad settings.

FlexCam and Flex Mode are truly innovative features that make the most of the Z Flip 4’s foldable design, but it feels like a missed opportunity to capture its full potential. Since the Z Flip 4 is marketed as the ultimate influencer smartphone, Samsung should have pursued a native integration partnership with the current content king, TikTok, rather than the flailing Facebook/Instagram.

Plus, Flex Mode isn’t fully optimized for TikTok or other apps like Hulu. And it doesn’t even work with Netflix. What’s more, TikTok is slow to launch when accessed via Flex Mode and all of its icons appear bunched up on the top screen, with some of them so close to the crease that it’s awkward to maneuver. Some of the icons even overlap on the right side. By contrast, when I tried Flex Mode with Instagram, the feature switched on almost instantaneously and made perfect use of the available screen space. 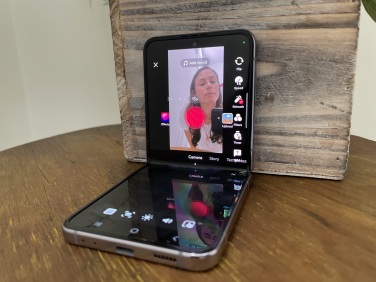 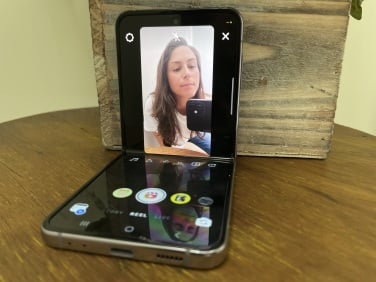 In general, the Z Flip 4’s dual-screen features work well in a pinch if you’re a jet-setting influencer who doesn’t have time to edit content on a laptop, but it feels a little cramped. However, if you’re in the market for a true multitasking powerhouse, you’re better off with Samsung’s Z Fold 4, which Mashable’s Alex Perry raved about.

Recently, tech companies have been pushing the idea that smartphones are an extension of our bodies and should be customized as such. We wear jewelry and paint our nails, so why shouldn’t our phones reflect our style and taste, too? The latest Pixel 6 line doubled down on this last fall with its eye-catching device colors and UI palettes to match your wallpaper. Even Apple jumped on the bandwagon this past spring by announcing a customizable lock screen with iOS 16.

But Samsung takes the cake for its freedom of expression approach. With the Z Flip 4, you can customize almost everything. From the device’s four different colorways to customizing your cover screen with different clock designs, photos, videos, GIFs, or even your own AR emoji, Samsung wants to make sure you’re bringing your whole self to your phone.

Thanks to these cover screen widgets, I definitely unfolded the Z Flip 4 less.
Credit: Samsung

There’s even a bespoke program where users can customize the Flip 4’s design even more. For an additional $40 you can change the Z Flip 4’s frame to silver, black, or gold and the body to yellow, white, navy, khaki, or red. But, as someone who struggles with basic decisions like what to eat for lunch, this is simply too many choices for me.

Don’t get me wrong, I fully support expressing oneself. But I’m definitely wondering if Samsung should’ve spent a little less time on the Z Flip 4’s color customization and a little more time improving on the essentials like paring down the crease and improving the battery life. Otherwise, it just feels smoke and mirrors.

About the crease and the battery life

To be fair, the crease has gotten much better. Compared to earlier versions of the Z Flip, it’s more refined and less noticeable. But it’s still there. It doesn’t bother me so much when viewing content, but I notice it every time scroll and it sends shivers down my spine, like when something brushes up against your leg in the ocean.

The Z Flip 4’s battery life has also gotten better since earlier versions, but there’s definitely room for improvement. After two hours of downloading and then browsing Slack, Twitter, Instagram, TikTok, and WhatsApp, I noticed the 3,700mAh battery had already dwindled from a full charge to 67 percent. As for a typical full day of usage, I’d normally be left with about a 20 percent charge at night. So I was ultimately surprised by its longevity. It’s a smaller phone than the Samsung Galaxy S22 Ultra and the iPhone 13 Pro Max, which reportedly last for 16 hours and 18 hours, respectively, so it makes sense. That being said, a battery life that spars with the heavyweights would make the Z Flip 4 unstoppable. 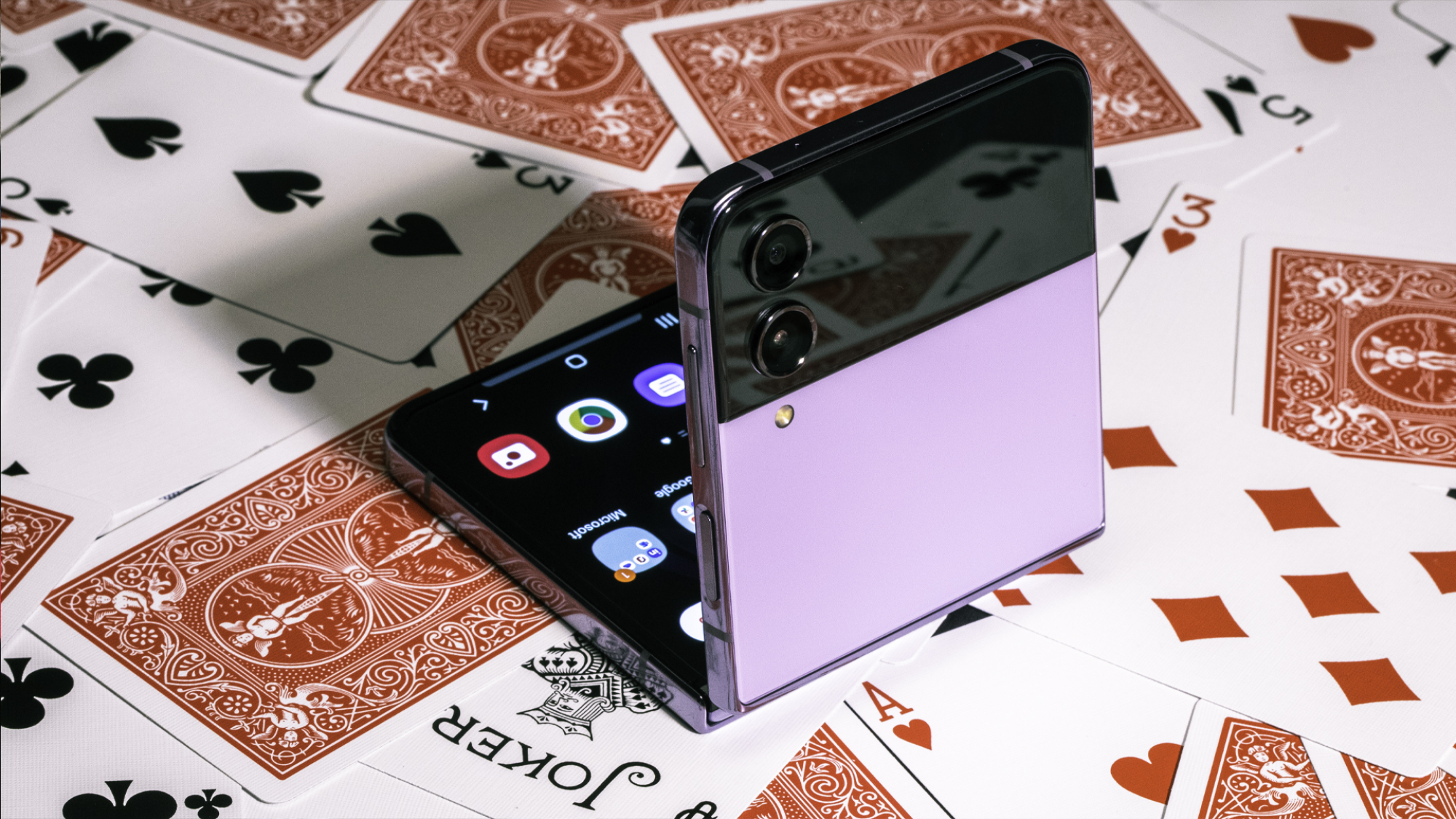 Does this mean I’m a member of the BTS Army now?
Credit: Kyle Cobian / Mashable

Overall, the Samsung Z Flip 4 feels like the most compelling compact foldable yet. For $999, the price is the same as the iPhone 13 Pro and offers similar specs (except for the shorter battery life.) It’s also a bargain compared to its foldable sibling, the Z Fold 4, which starts at $1,799 and arguably offers much more.

The Z Flip 4’s hands-free tech, useful cover display, multitasking features, and customizable everything are fun and exciting to explore, but they’re more of a bonus than a necessity for my humble “geriatric” millennial lifestyle. However that’s not a ding against the Flip 4. Just because those features don’t hugely entice me, it doesn’t mean they woo over a lot of other people. Don’t believe me? Just ask the 70mm strong BTS Army. The Clitoris Steps Into the Spotlight With New Scientific Discovery

Senators defenseman Thomas Chabot out at least a week