Late November 2019, a double-signed pink gold Patek Philippe ref. 2523 with a blue enamel dial became one of the most expensive watches in the world. To date, it is still the most expensive watch to be auctioned in Asia This November, Phillips auction house and Bacs & Russo, are  offering a similar model – a rose gold Patek Philippe reference 2523/1, an “extremely rare double-crowned world time model with guilloché dial.”

With a blue enamel dial signed by Milan retailer Gobbi, the Patek Philippe ref. 2523 hammered for close to US$9 million, breaking the previous record holder for “most expensive watch sold at auction in Asia” when it beat the previous title holder soundly by more than double – a pink gold Patek Philippe “Tiffany & Co.” which sold for US$3 million. 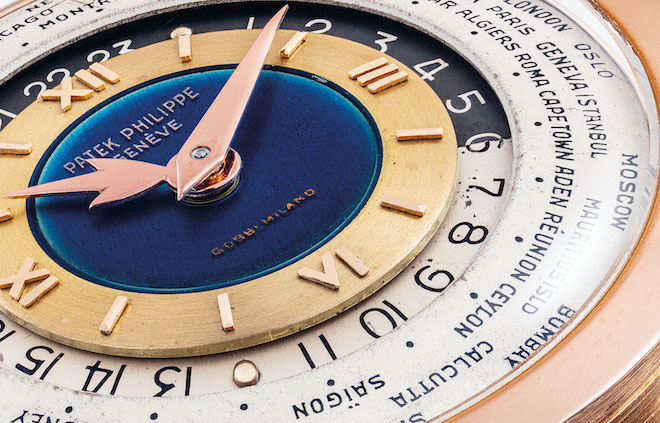 “Its impeccable state of preservation and superb dial make this reference 2523/1 one of the most desirable watches to have left the ateliers of Patek Philippe,” – Aurel Bacs and Alex Ghotbi

This latest “extremely rare double-crowned world time model with guilloché dial” rose gold Patek Philippe reference 2523/1, is among the lot of high end watches to be auctioned at the Bacs & Russo November 6 – 7 “Geneva Watch Auction: XII” sale at the Hôtel La Réserve. With an estimate of $2.1 million – $4.3 million, Aurel Bacs, senior consultant of Bacs & Russo and Alex Ghotbi, head of Watches Continental Europe & Middle East, are calling the Patek Philippe Reference 2523/1 both an icon and a milestone.

The Patek Philippe ref. 2523 enjoys tremendous provenance. Legend has it that in 1876 after missing a train in Ireland, Scottish railroad engineer Stanford Fleming began to look for a way to standardise time. Speaking before the Royal Canadian Institute in Toronto in 1879, he proposed to divide the Earth into 24 time zones of 15° each, one hour apart with a universal time for each individual zone. His idea was met with considerable resistance from governments and scientific communities but his persistence paid off when his revolutionary concept as finally adopted in 1884 in Washington, when the 25 nations taking part in the International Meridian Conference decided that the prime meridian of 0° longitude would pass through Greenwich, England. 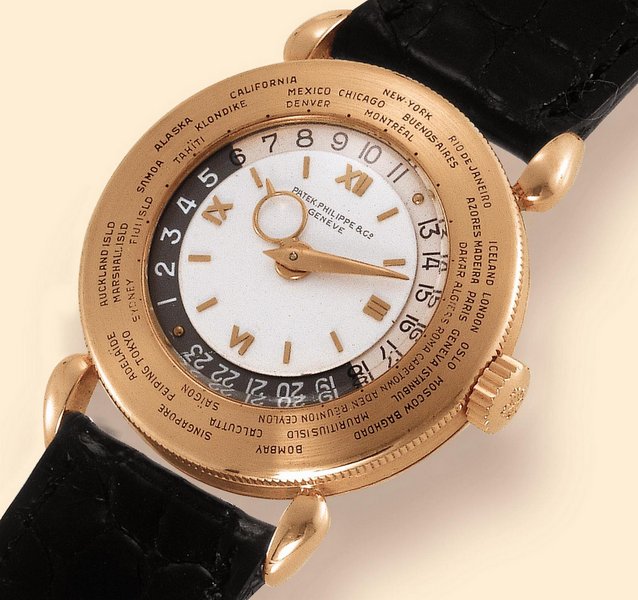 World time watch seemed of little interest to watchmakers until genius watchmaker Louis Cottier designed a pocket watch movement featuring a local time with hour and minute hands at center, linked to a rotating 24hour ring, and bordered by a fixed outer dial ring with the names of different cities inscribed on it. The world time pocket watch, the progenitor for all world time watches, displayed every time zone in the world simultaneously, all the while allowing easy and accurate reading of local time, and all on a single dial. 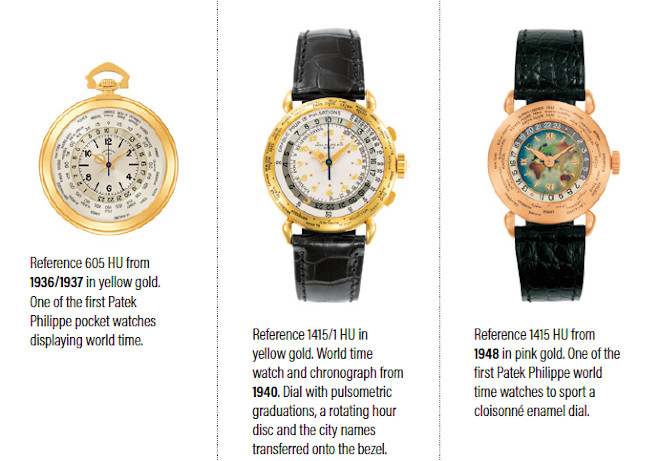 Cottier miniaturised his invention in the late 1930s, appearing on the Patek Philippe reference 1415, a single crown model with its bezel engraved with cities to be switched manually. By 1953, the Patek Philippe reference 2523 featured a new two-crown system, one for winding the watch and the other at 9 o’clock controlling the city disc. Two versions were available, reference 2523 with larger lugs sitting above the bezel and reference 2523/1 with a slightly larger diameter and thinner lugs no longer sitting above the bezel.

When introduced to the market this new double crown world time watch  was not a commercial success resulting in very few pieces manufactured. Hence, this exemplar is one out of the four known reference 2523/1 in rose gold with guilloché dial, with one is in the Patek Philippe museum and another two in private European collections for more than 15 years. Suffice it to say, something like this Patek Philippe ref. 2523 in untouched, ever-so-slightly time ravaged condition is a rarity and expected to fetch a decent sale price. 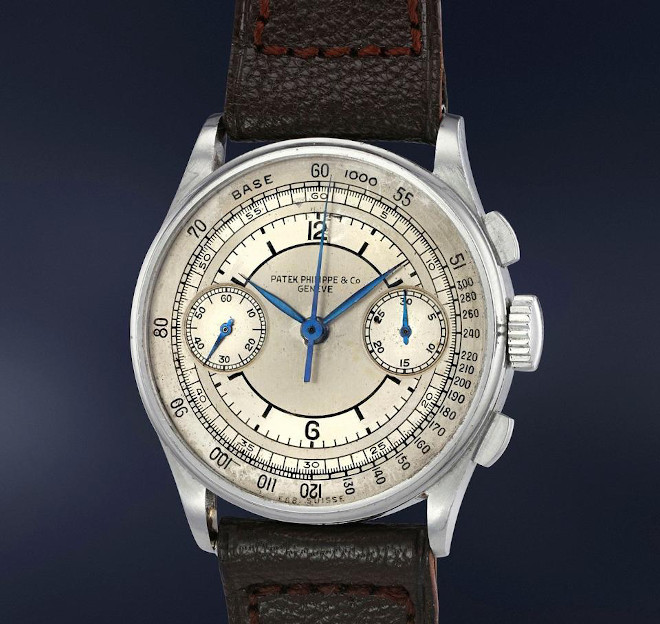 Sector dials were seemingly not very popular considering the very short period of time during which they were made (between the mid-1930s to the early 1940s) but their desirability has been on the rise for the past decade with not only the huge demand for vintage watches but also modern re-iterations by brands. There is a je ne sais quoi with the present Patek Philippe Ref. 130 in steel from 1937 that is both poetic and strong. Offered by the family of the original owner, this watch was originally delivered to France, the country where it resided its entire life until it was consigned to Phillips for the present sale – a story confirmed by the dial signed “FAB. SUISSE”, denoting that the watch was delivered to France. Having stayed in France for 83 years, it is the first time the watch is leaving the country to come back to Switzerland. The 33mm case with its long and thick lugs gives the watch much more wrist presence than the actual size suggest. 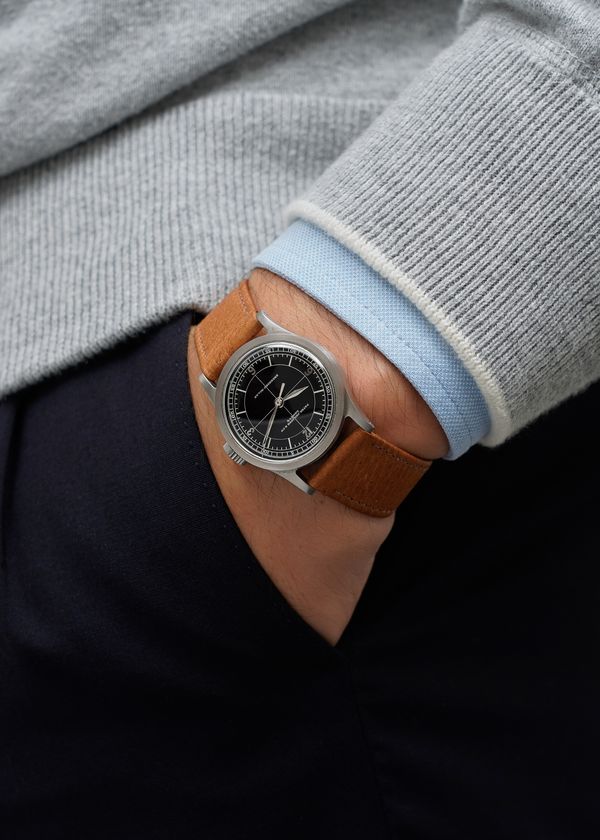 I remember when I first saw this timepiece. I was told that I would be shown “something you might enjoy”, but the instant I laid my eyes on the watch, reality surpassed expectations by a fair margin. The Reference 96 is without a doubt one of the most elegant watches ever created. Its simple case lines were conceived following the Bauhaus tenet “form follows function”, rendering it a masterpiece of industrial design thanks to the exceedingly pure and frill-less architecture. Already an extremely attractive and collectible piece, some early examples – such as the present piece – were retro-fitted with indirect center seconds, elevating their appeal well beyond the “standard” version. So, when I came across an indirect centre seconds, stainless steel, perfectly preserved reference 96 with an immensely attractive, previously unseen and fully confirmed black sector dial, I was simply blown away. The subtlety of this timepiece is also a factor that makes it – for me – one of the most appealing proposals in the sale: while it would be most likely dismissed as irrelevant by the layman, this watch would command the highest respect and admiration from the most important collectors and connoisseurs of the brand. Truly, I find this to be one of the greatest appeals of high-end vintage Patek Philippe collector’s pieces, a category perfectly epitomised by this remarkable discovery. 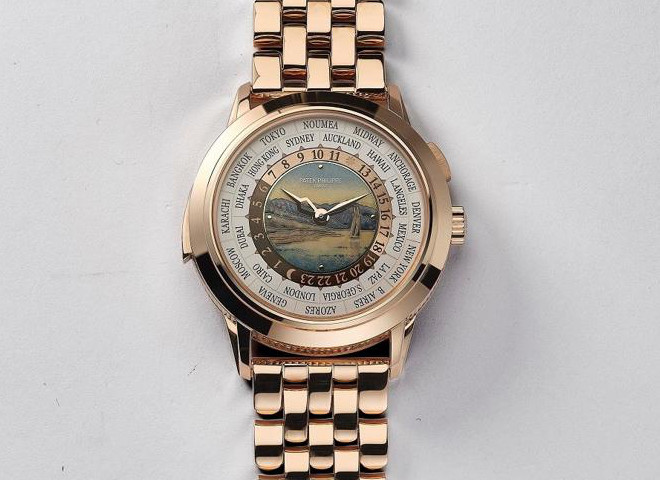 Uniting two of Patek Philippe’s most popular complications in one exquisite grand complication watch, this pink gold Patek Philippe ref. 5531 world time minute repeater with cloisonné enamel dial representing Lake Geneva  is quite likely the only one of its kind. With an estimate $544,306 – $1.1 million, this Reference 5531 dressed with matching pink gold bracelet is the first time it has been seen at auction. Why God Created Us? Spirituality Podcast