Big and bold, though your father’s suits are no longer en trend, “Dad” sneakers are totally de rigeur this season; Gucci‘s audacious Rhyton sneaker is kicking things up a notch with two GG monogram-printed editions. Following on the heels (no pun intended) of Gucci Rhyton “Brick Red” style from March earlier this year, these new multicoloured Gucci Rhyton GG monogram sneakers take Gucci’s satisfyingly chunky Rhyton silhouette and breaks up the expansive, expressive canvas with a colourful palette of brown and blue GG print panels, reflective trims, yellow accents, a logo label on the tongue and a chunky white and pink rubber sole.

While the previous Gucci Rhyton “Brick Red” sits squarely in the lap of luxury heritage with a “Beige/Ebony” smart-casual look, the new multicoloured Gucci Rhyton GG monogram sneakers offers a more summer-ready look, with the hype of branded motifs rendered in the brand’s signature waxed cotton completed with the brand’s logo stamped onto the cut panels. 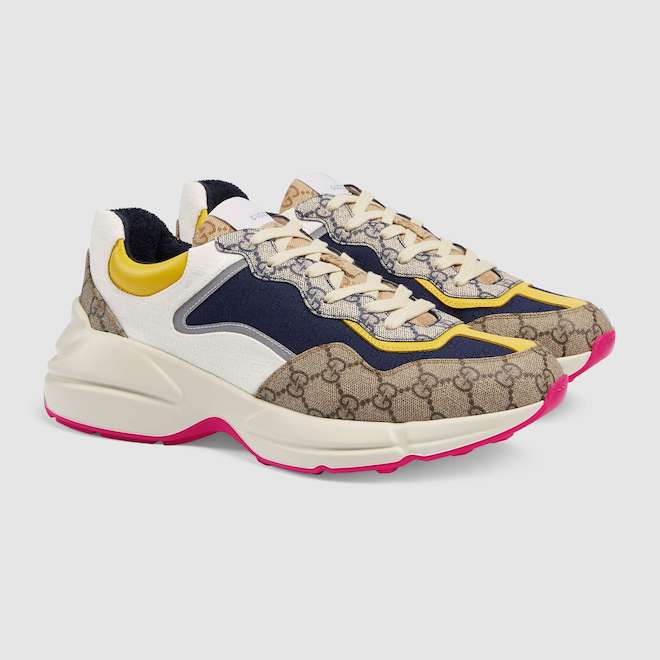 The upper of the multicoloured Gucci Rhyton GG monogram sneakers is a mixed medium of  monochromatic GG monograms paired with a light beige tongue, contrasted by bright yellow highlights and then slightly muted with a light beige tongue and matched by cream-coloured laces while navy sidewalls and reflective strips take up the forefoot. Other details like crisp full-grain leather, additional “GG” branding, a thick articulated white midsole and a pink outsole round off the shoe’s intricate design.

Made in Italy and designed in a low top silhouette, the Gucci Rhyton sneaker is round toe style with a chunky white and pink rubber sole. The House’s emblematic sneaker was revisited as part of the Spring Summer 2020 collection where styles worked together to create Alessandro’s language of self-expression. 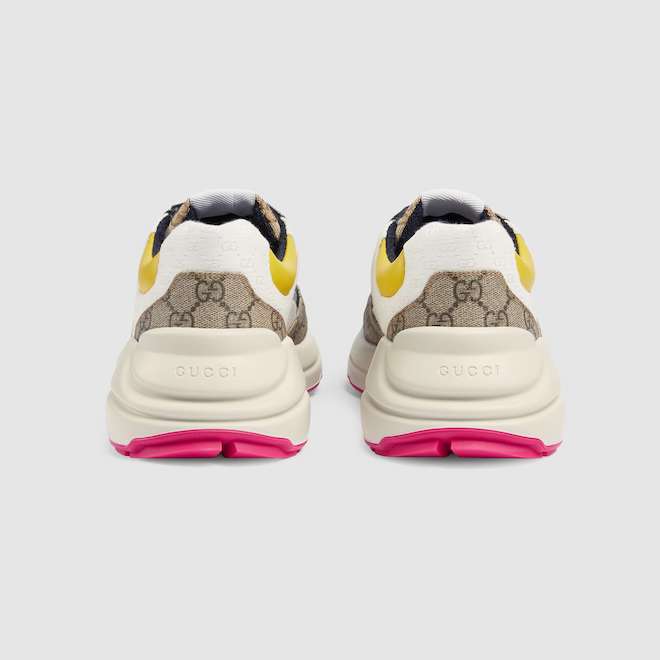 Defined by a thick sole and chunky construction, the Rhyton is presented in a mix of monogram archival fabrics reimagined through the avant garde designer’s hybrid design narrative. To abuse a quote from Roman statesman Cicero, ‘A room without books is like a body without a soul.’  One dreads to think what a closet without Gucci would be like.

Rolls-Royce Unveils Most Advanced Black Badge Motorcar Yet in SEA

Elon Musk Is in UK for New Gigafactory Talks, May Travel...

Soak Up The Sun in These Ideal Summer Home Swimming Pools