If Facebook has been the main obstacle between you and the VR bandwagon, we’ve got great news.

Meta announced on Thursday that, starting in August, you won’t need a Facebook account to use its Quest VR headsets anymore. There will be a new Meta account that every new Quest owner needs to create once they roll out next month. Existing device owners can use their current setup until Jan. 1, 2023, at which point they’ll need to make a Meta account for the Quest or any future Meta devices. The account itself will merely be a way to manage your purchased games and apps, and in the words of Meta itself, “it’s not a social profile.”

Instead, there will be an accompanying “Meta Horizon” profile you create alongside the Meta account, or it’ll just replace the Oculus profile you already have if you’re a VR vet. Here, you can make a social presence, connect your Facebook and Instagram accounts, and manage your “Followers,” which will replace the previous “Friends” model. In that sense, it will resemble Instagram more than Facebook. Existing Oculus friends will automatically become followers, and you’ll automatically follow them back when this change happens. 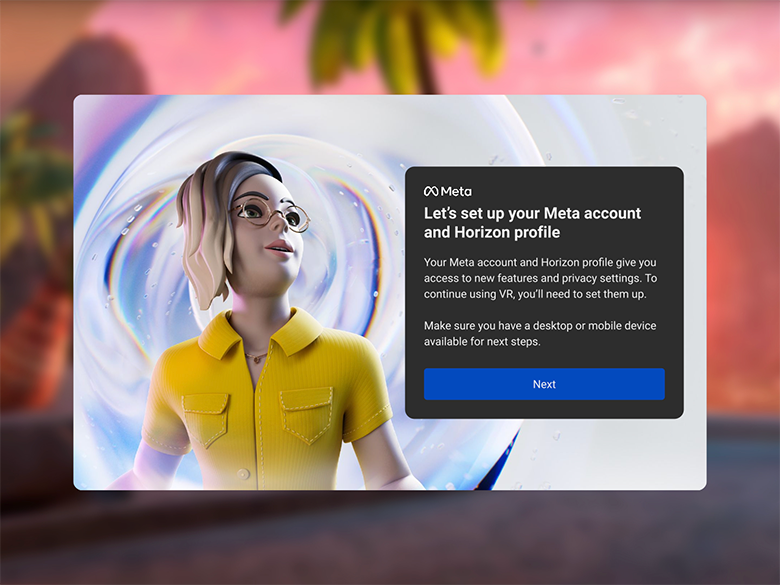 The beginning of your new Meta journey.
Credit: Meta

So, in other words, those who already have Oculus profiles will see them shifted over into Meta Horizon profiles that function in more or less the same way. You’ll also be able to decouple your Meta account and your Facebook account if you previously logged into a VR headset with it. The end result is that nobody has to have a Facebook account if they want to use a Meta headset going forward, which is probably for the best.

Meta’s next $1,000 headset could be called Quest Pro

The biggest potential hangup here is for people who had existing Oculus accounts tied to Facebook accounts and choose to unlink the two when the switch occurs. In response to an inquiry from Mashable, Meta confirmed that Meta account and Facebook account data will still be linked for up to 90 days after you decouple the two.

Still, this should mostly be a relief to those who have thus far avoided Quest headsets because of the Facebook requirement. Of course, Meta still owns the product and benefits from every purchase, so you still have to think about that. Oh well.

UPDATE: Jul. 7, 2022, 4:25 p.m. EDT This article has been updated to include clarification on account data sharing between Meta and Facebook accounts. Science Lags Behind for Kids with Long COVID