In the Game of Thrones universe there are plenty of morally grey characters.

The original show had the often dubious likes of Jaime Lannister and Theon Greyjoy, while House of the Dragon has already introduced the sneaky Daemon Targaryen, and the (arguably even sneakier) Otto Hightower.

But some characters are just out-and-out bad.

In Game of Thrones, we endured the relentlessly cruel Ramsay Bolton, and in House of the Dragon there’s a new villain in town: The Crabfeeder (Daniel Scott-Smith).

But who exactly is he, and what do we know about him?

Who’s who in ‘House of the Dragon’: The Targaryen family tree

What do we know about the Crabfeeder so far?

We’re first introduced to the Crabfeeder, whose real name is Craghas Drahar, during a small council meeting in the very first episode of House of the Dragon.

“The growing alliance among the free cities has taken to styling itself ‘The Triarchy.’ They have amassed on Bloodstone, and are presently ridding the Stepstones of its pirate infestation,” explains Lord Corlys Velaryon.

“A man called Craghas Drahar has styled himself the Prince Admiral of this Triarchy. They call him the Crabfeeder due to his inventive methods of punishing his enemies.” That “inventive method”, for what it’s worth, involves nailing men to stakes on the beach at low tide and letting the crabs devour them while they’re still alive.

Hang on a minute, though. Free cities? Bloodstone? Stepstones? That’s a whole lot of words, so let’s back up a step.

What are the free cities and the Stepstones?

Now that we have new opening credits, we no longer have the benefit of that big map of George R.R. Martin’s universe, but there are still plenty of maps online. In a nutshell, the Stepstones is the archipelago that lies across the Narrow Sea, essentially bridging — stepping stone-style — the two continents in Martin’s universe, Westeros and Essos. Westeros is, of course, made up of the Seven Kingdoms (including the Crownlands where King’s Landing sits). Essos, meanwhile, is where the “free cities” can be found, including the likes of Myr, Tyrosh, Lys, and Pentos.

Given that any ships sailing south from King’s Landing need to pass through the Stepstones, you can understand why it would be considered such an important strategic location, especially to the Lord of the Tides.

“I would urge that you not allow this Triarchy much latitude in the Stepstones, Your Grace,” Lord Corlys tells King Viserys in episode 1. “If those shipping lanes should fall, it will beggar our ports.” 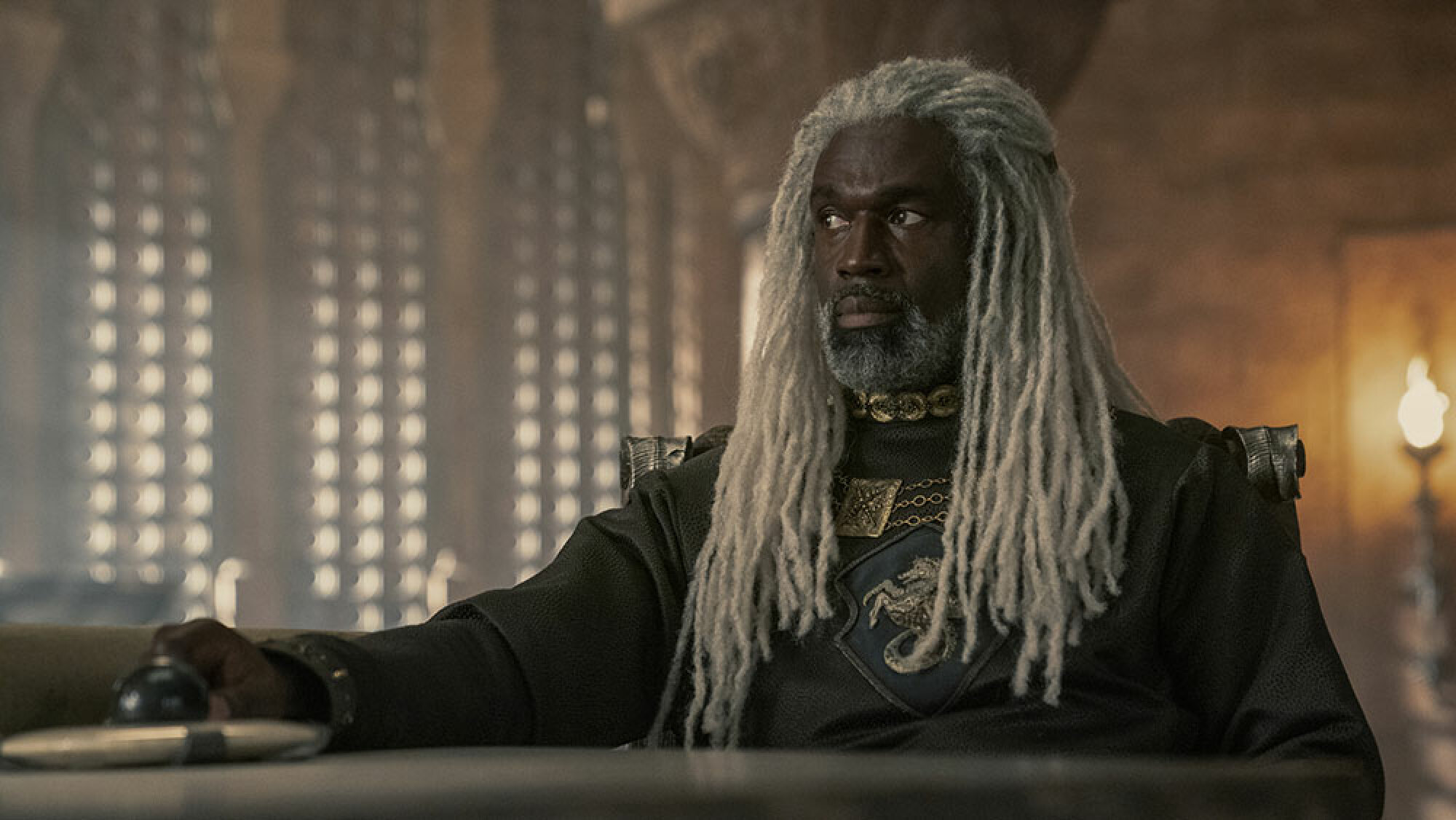 So why is the Crabfeeder an enemy?

As King Viserys points out in episode 1, the Crabfeeder killing pirates isn’t actually that much of an issue for Westeros. The problem is, though, he’s clearly doing a bit more than just killing pirates.

“Four ships have now been lost,” says Lord Corlys in episode 2, storming into a small council meeting. “The last one was flying my banner.”

The Crabfeeder, it seems, isn’t worrying too much about who exactly he feeds to the crabs — and as the small council points out, he’s being provided with ships by the free cities themselves. Daemon Targaryen, later in the same episode, even describes him as a “Myrish Prince”.

“The Crabfeeder is backed by powerful entities within the free cities who wish to see Westeros weakened.”

“The Crabfeeder is backed by powerful entities within the free cities who wish to see Westeros weakened,” responds Corlys. “And the King’s failures have allowed him to accumulate strength. If those shipping lanes fall, my house will be crippled.”

Clearly, as the Lord of the Tides and head of House Velaryon, the Crabfeeder presents the biggest problem to Lord Corlys, which is why he wants Daemon’s help in getting rid of the man.

The question is, what will it cost him to do so?

How much will The Crabfeeder feature in House of the Dragon?

So far the Crabfeeder has only been glimpsed in episode 2, but judging by the trailer for episode 3, he’s about to make a much bigger appearance.

From the looks of it, the next episode will feature a battle at the Stepstones, during which Lord Corlys and Daemon Targaryen will don some armour and attempt to reclaim the territory themselves. Craghas Drahar will clearly be a big part of that fight.

We don’t know what his ultimate fate will be, but — even if he dies in battle — it seems clear that the fight will have dire consequences for the relationship between King’s Landing and the free cities of Essos.

House of the Dragon(opens in a new tab) is now streaming on HBO Max.