From the producers of 47 Meters Down comes another horror movie that urges audiences to feel smugly superior for choosing channel surfing over extreme sports.

This time, our pair of plucky heroines aren’t swimming with sharks. They’re scaling a dilapidated 2,000-foot tall radio tower. Why? Oh, there’s plenty of backstory. But come on now — you don’t come to Fall for the pathos. You come for the scares, suspense, and sheer stupidity of human intrepidness. Fall delivers on some of these things.

As a devoted indoor kid, there’s nothing in this whole world that would convince me to scale a massive pole with nothing but a rusty ladder and a pushy bestie to help me. But such instant aversion is what makers of movies like 47 Meters Down, The Shallows, Adrift, and even The Descent expect of much of their audiences. We’re not meant to relate to the gutsiness or hubris of the heroes who dare to swim with sharks, set sail, or spelunk. We’re meant to be wide-eyed with tension, drop-jawed with terror as these models of beauty and athleticism chuck themselves toward the brink of death, while bleeding out sob stories.

Fall is a high-stakes movie about besties in extreme sports horror. 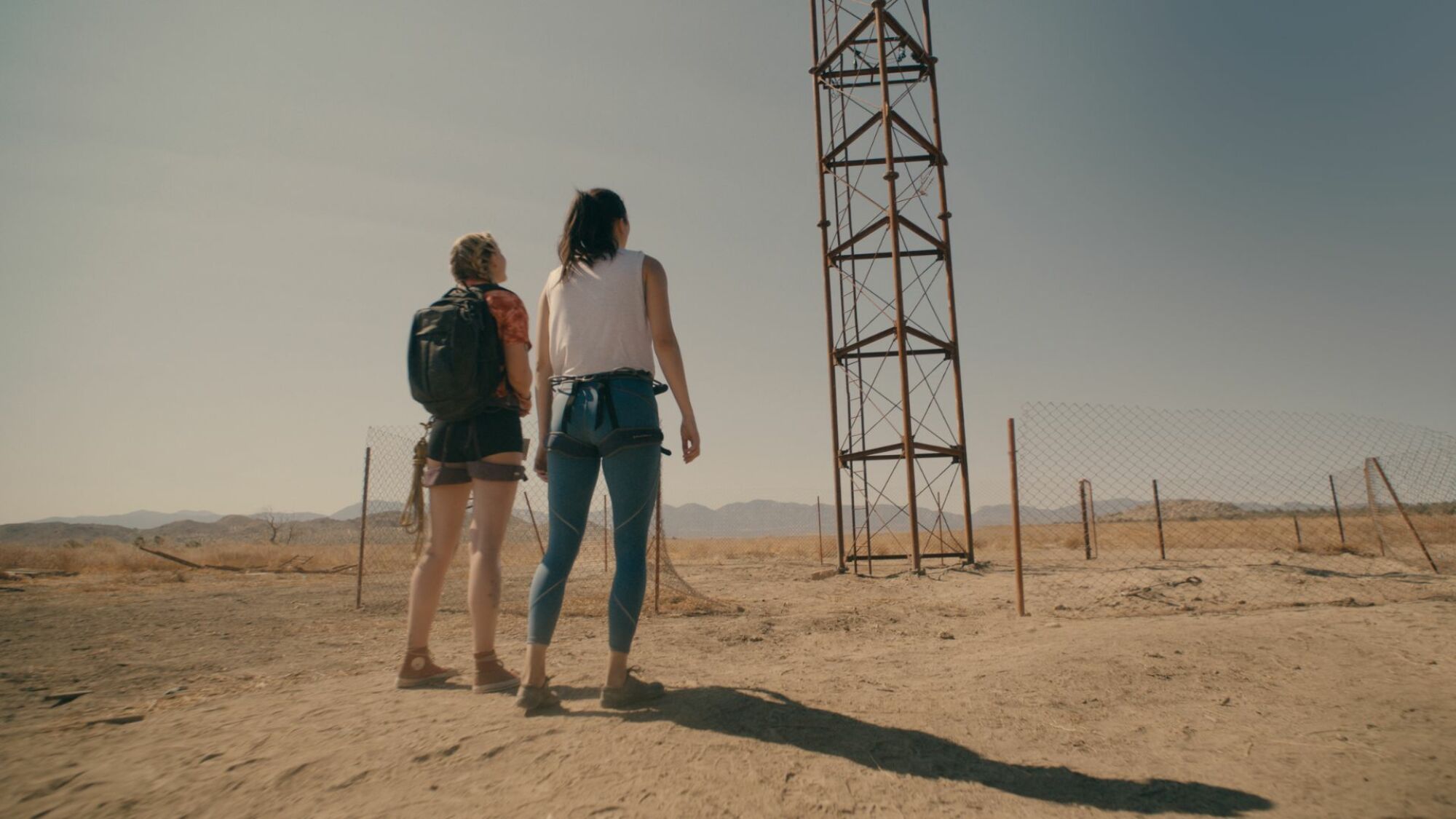 In Fall, accomplished climber Becky’s (Grace Caroline Currey) sob story begins with a rockface climb where her handsome husband makes an abrupt and deadly descent. Cut to a year later, Becky’s lawman father (Jeffrey Dean Morgan in a brief Hopper-like appearance) begs her to put down the endless bottles of booze and find something else to cling to besides her departed partner’s cremains. Enter bestie Hunter (Virginia Gardner), an ever-plucky and impetuous blonde whose climbing exploits have made her a fairly famous Youtube vlogger. Naturally, she insists that the best way to move through the overwhelming grief is to climb something stupidly tall and dump the husband’s ashes from it. Let him be memorialized as he died, falling from a great height!

‘Stranger Things’ is almost back, so here’s your reminder that Hopper should have stayed dead

Though earnestly performed by a grit-toothed cast, the emotional setup is a chore, as no one choosing a movie called Fall is looking for poignant drama. Soon enough, the girls are skittering up to scary heights, and yep, the ladder falls and they’re stuck atop a platform with no phone reception, no tools, and circling vultures. Screenwriters Jonathan Frank and Scott Mann (who also directs) attempt to flesh out the thin concept with a creeping conflict between the besties, the source of which is painfully predictable. Also tiresome are the tedious archetypes of femininity presented by the not-so-dynamic duo of serious, good-hearted brunette and selfish, fun-chasing, sexy blonde.

How does Fall compare to 47 Meters Down? 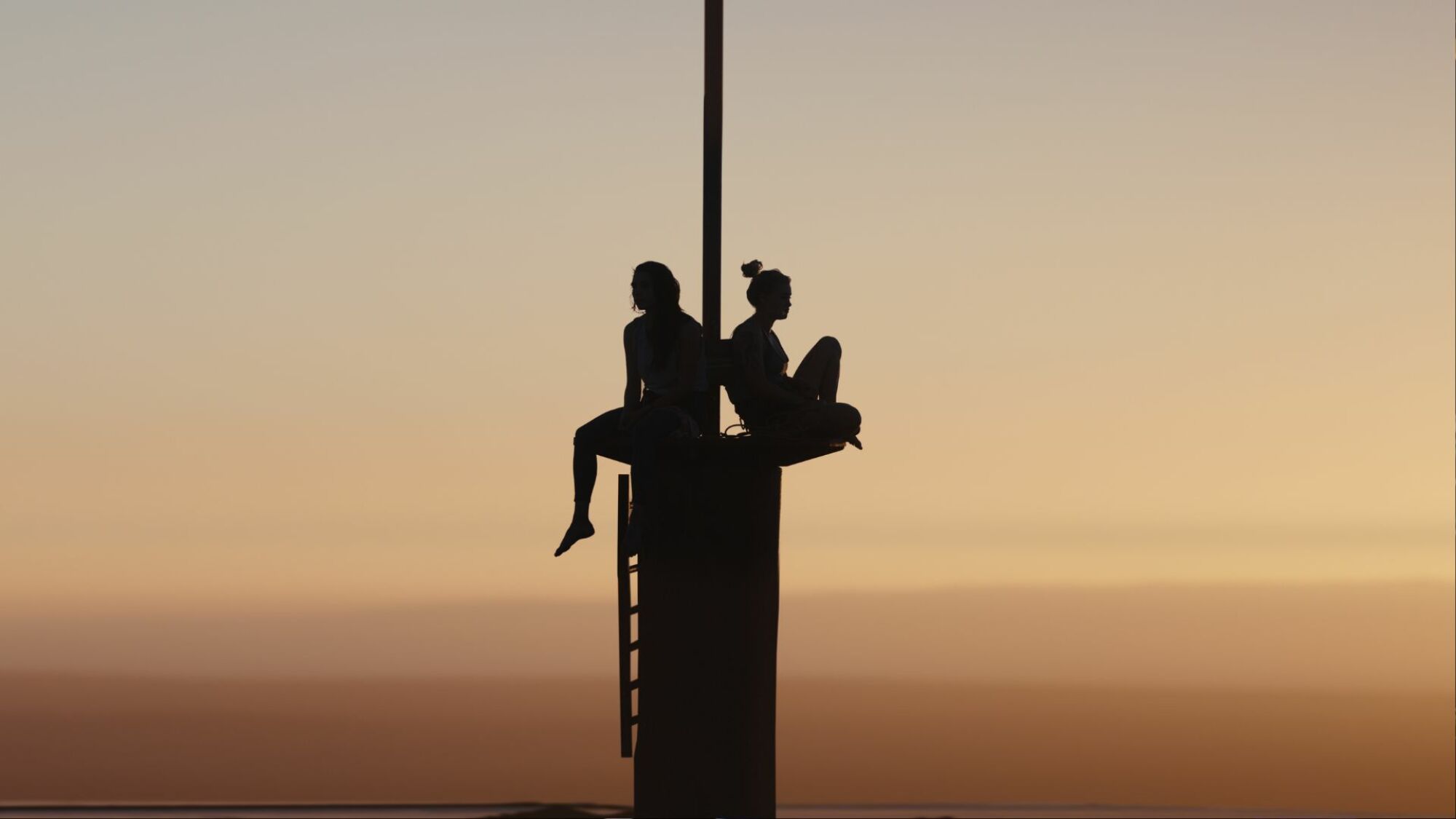 Look, 47 Meters Down may have been a movie of cheap thrills. But the vibrant sisterly bond — plus fully game performances from its leading ladies — made the movie’s emotional stakes cut as ferociously as shark teeth. Fall falls short of recreating that sense of sorority, in part because Hunter is clearly out for herself on some level from the start. But moreover, Mann’s direction seems to have left Currey stranded in a performance that is one-noted sadness or screaming. Gardner has more fun with the role of the risk-taker, brandishing a reckless charm that’s glancingly reminiscent of the chaotic whimsy of Florence Pugh. So, when the film finally reaches its third act, it’s Gardner and her performance that comes out on top, even if the script fails them both.

To the script’s credit, however, Frank and Mann do find a surprising amount of ways to make “stuck on top of a tower” more than meets the eye. Scrambles for falling equipment, desperate attempts to signal for help, and a surprisingly frenzied battle with a vulture deliver the kind of ghoulish and suspenseful thrills these kinds of movies are made for. Amid the miseries these embattled buddies endure, you might begin to wonder, would you rather fall to your death? Die of exposure? Or be eaten alive by a bird of prey? Fall gives you plenty of time to ponder that. But the most bonkers bits are the third act call-backs, where formerly flawed escape plans are given a new, more dramatic, or downright gruesome twist.

In the end, Fall is a movie that’s emotionally shallow, but more clever than it needs to be, and as grisly as your dark heart is likely hoping. This is not a good movie. But it is a movie that made me cry out, “Oh good god!” And that’s something.

Fall opens in theaters on Aug. 12.

How to watch ‘House of the Dragon’ in the UK, U.S., and abroad