After a long wait of seven years, fans only have to wait for another seven days to experience the action and adventure The Last Of Us Part II will bring. Sequel to the original game released in 2013, The Last Of Us Part II, set in a post-apocalyptic United States, expands on the relationship between characters and develops the incredible world further. While most fans are genuinely thrilled, some feel this is no longer exciting news because of the unfortunate leak that occurred in April.

The leak gave away certain elements from the plot and gameplay. But, the game still retains a fair share of its mystery and plot twists, according to director Neil Druckmann.

“There’s so many false things out there. We don’t want to go out there and correct anything because that would be spoiling the game in a way, by saying what it isn’t, we’re kind of saying what it is,” he said in a recent interview with Eurogamer.

The team at Naughty Dog treated fans with additional insight into The Last Of Us Part II with a series of weekly videos. There were four such videos, each providing a spoiler-free sneak peek into a distinct aspect from the upcoming game. Naughty Dog wanted to build up the hype, and they did.

Also read: “The Ending Is Not Out There”- The Last Of Us Part II Director Assures Fans

The first video took us inside the story. The team discussed their approach to developing the game’s narrative and consolidated some exciting details about the themes and events of the game’s storyline. Ellie and Joel have dwelled in the peaceful community of Jackson among the mountains. After that, we saw Ellie embarking on a journey to Seattle for retribution.

The next one walked us through the thought-process behind the gameplay. Team members expressed their ideas behind designing the gameplay and mechanics that brought the game to life. Incorporating realism has remained a critical factor, which is why they wanted Ellie to be capable of doing things a real individual of her size would.

The team then showcased the insane amount of effort put in for the full attention to detail. New encounters, improved character models, and overall better sequences have expanded the scale of the in-game world they have created. From character animations to the environment, everything is exceptionally accurate.

Finally, the last video of the series gave us a glimpse into the hostile world full of terrors. The team explained how the gameplay, as well as the level-designing, consider the choices a player makes. Every decision has a different outcome, and every step Ellie takes is going to influence her chances of survival. Moreover, there are more than a few ways to tackle any given situation.

Only a week more to go 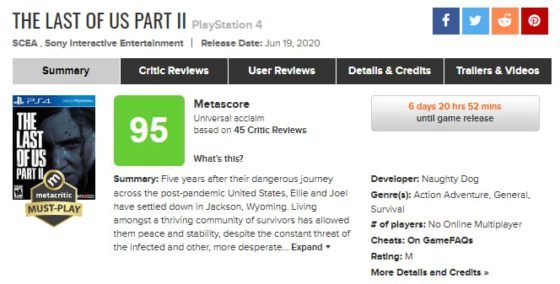 The leaks were indeed disappointing for the developers who have put in years of hard work to create a magnificent game. Despite all that, it might not matter as Neil Druckmann said, “There’s all these theories about what the ending is, but the ending is not out there. You actually don’t know how it all comes together.”

One can expect quite a few surprises and plot twists in the journey. The most significant changes would probably be in the gameplay as the developers are not hindered by underpowered consoles anymore. Naughty Dog seems to have utilized the full potential of the PS4 hardware for now. Eventually, the game will make its way into the next-gen PS5.

The Last Of Us Part II releases next week, June 19, for PS4, and the fanbase is delighted. They have waited for seven years for the sequel and will flock to buy it. The developers have put a lot of effort into character development and have crafted an extraordinary world. The narrative will be just as immersive and enthusiastic as the gameplay. Naked: How to Find The Perfect Partner by Revealing Your... Coolio Addresses the Trauma of Being Black in America | Love... I AM UNPREDICTABLE | Epic Comeback