If there’s anything we’ve learned so far from 2022, it’s that award shows are strange, occasionally very dramatic, affairs.

The 2022 Emmys was no exception, featuring some history-making moments, some very amusing moments, and some predictably awkward moments.

From Sheryl Lee Ralph’s momentous acceptance speech and Jennifer Coolidge dancing to the play-off music to grating ads and confusing opening numbers, here are the best and worst moments from the 2022 Emmys…

All the winners from the 2022 Emmys

Sheryl Lee Ralph became the first Black woman in 35 years to win Supporting Actress in a Comedy Series for her role in Abbott Elementary — and she marked the occasion with stunning singing and a powerful, inspiring speech.

“To anyone who has ever, ever had a dream, and thought your dream wasn’t, wouldn’t, couldn’t come true, I am here to tell you that this is what believing looks like,” Lee Ralph said.

It just…didn’t really make all that much sense.

4. Worst: Jimmy Kimmel lying on the stage during her speech 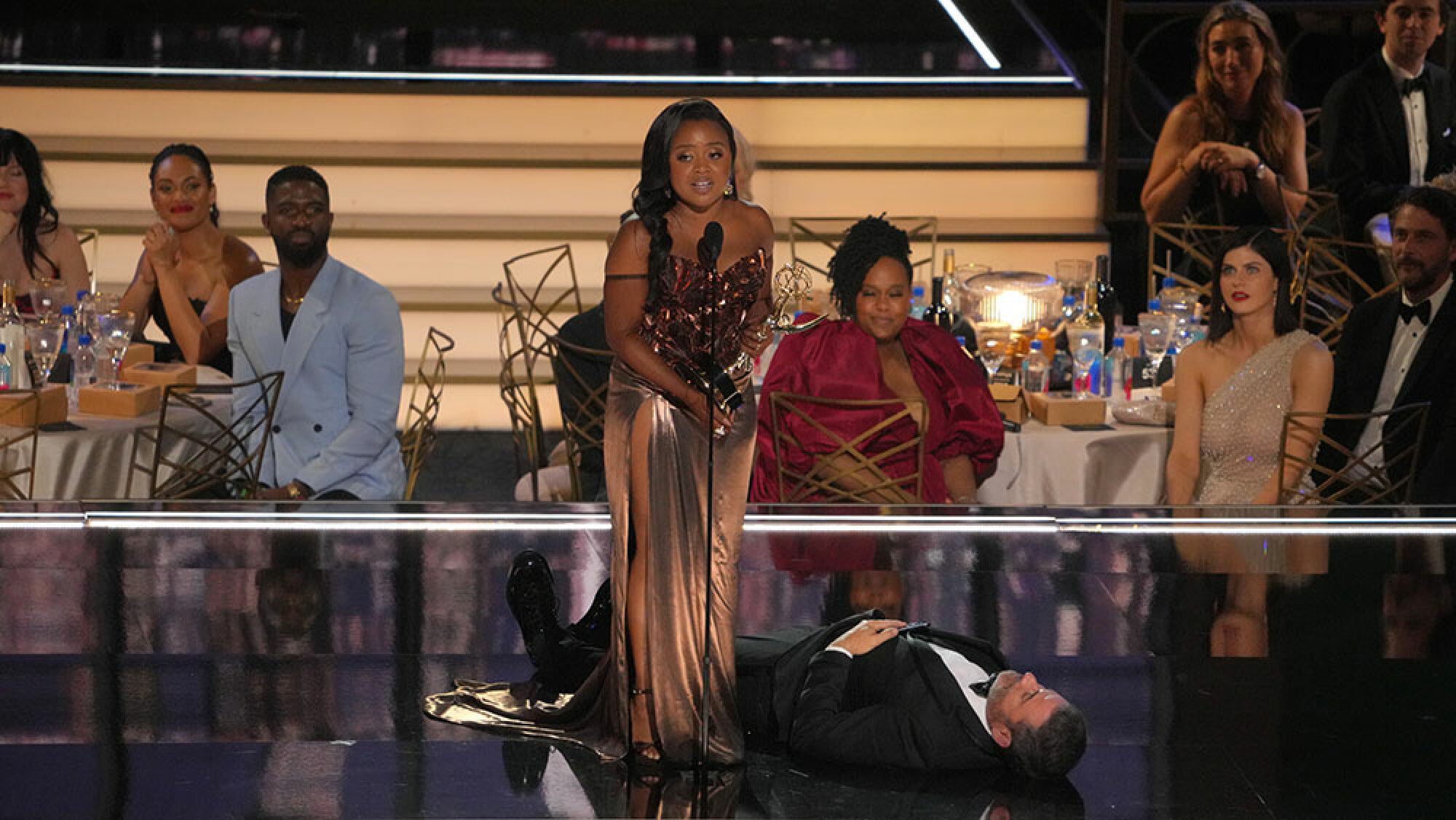 Will Arnett dragged Jimmy Kimmel onto the stage before announcing Brunson as the winner, explaining to the audience that Kimmel had lost so many times “he just got into the skinny margaritas back there.” When Brunson was called to the stage, though, Kimmel didn’t move — he kept lying there throughout her speech.

“Kimmel playing dead on the ground right next to a Black woman accepting her rightful place in the future of TV is such a stinging metaphor,” tweeted podcast host Sam Sanders.

After picking up the Emmy for Supporting Actress in a Limited or Anthology Series or Movie for her role in The White Lotus, Jennifer Coolidge had a lot of people to thank. Apparently the Emmys producers had other ideas, though, playing her off after only 70 seconds.

Coolidge’s solution? Just stay put and dance to the music.

6. Worst: A bunch of our faves getting snubbed 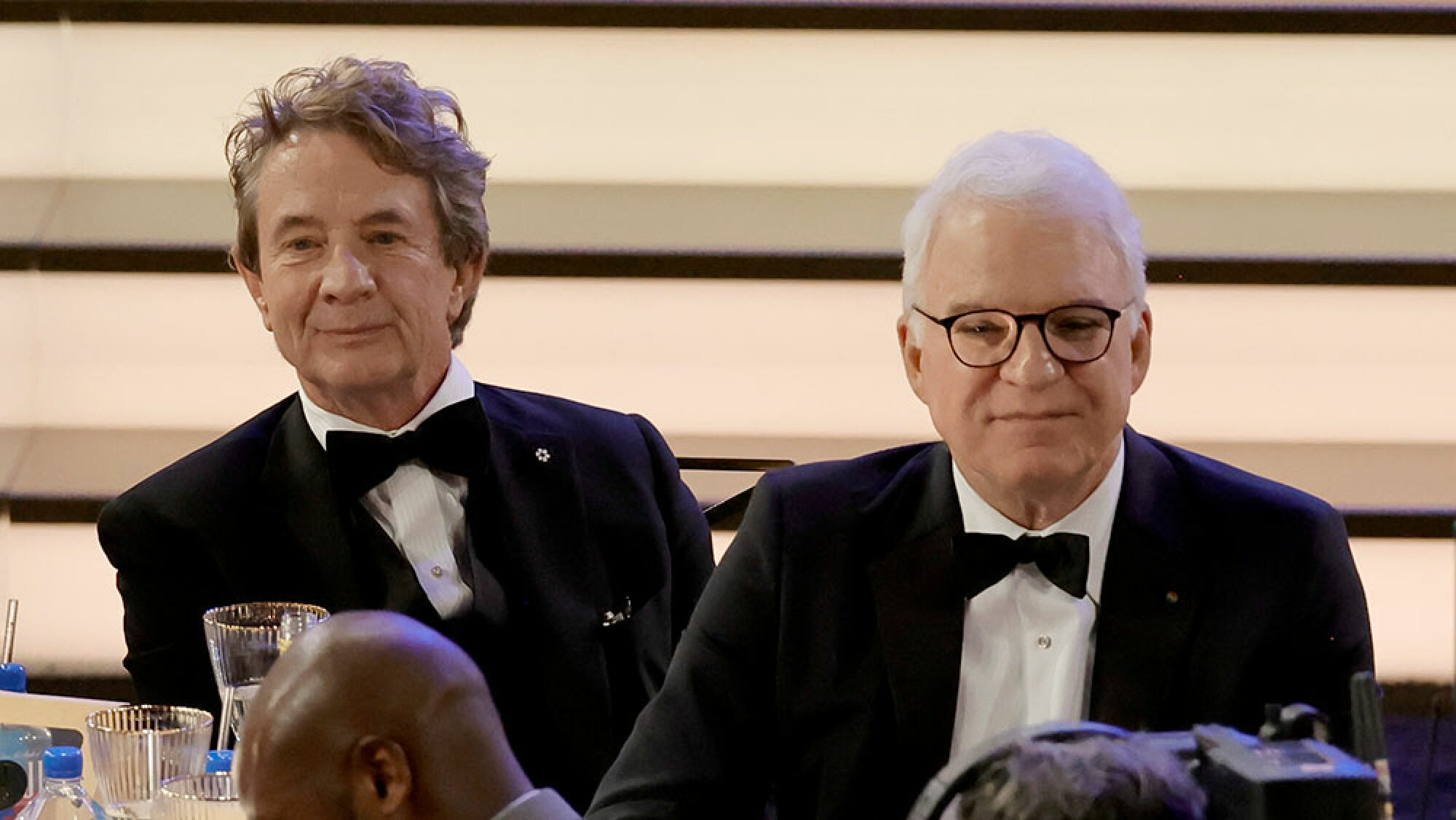 “Only Murders in the Building” didn’t have the best night.
Credit: Kevin Winter / Getty Images

Between them, Better Call Saul, Severance, Yellowjackets, and Only Murders in the Building were all up for some very big awards, and were all seen as having a pretty decent chance of winning some. Nope. Rhea Seehorn lost out to Ozark‘s Julia Garner, Martin Short and Steve Martin lost out to Ted Lasso‘s Jason Sudeikis. Severance won nothing. Yellowjackets won nothing.

Lee Jung-jae, star of Netflix’s excellent dystopian thriller Squid Game, made history after he became the first Asian star to win in the Best Male Actor in a Drama category.

“Thank you to director Hwang [Dong-hyuk] for making realistic problems we all face come to life so creatively on the screen with a great script and amazing visuals,” said Lee. “Thank you!”

A three minute commercial mid-Emmys? No thank you.

After winning the Competition Program Emmy for Watch Out For The Big Grrrls, Lizzo took to the stage and gave a powerful speech.

“When I was a little girl, all I wanted to see was me in the media. Someone fat like me, Black like me, beautiful like me,” Lizzo said. “If I could go back and tell little Lizzo something, I’d be like, ‘You gonna see that person, but bitch it’s gonna have to be you.'”

“Last time I was here I was told not to swear and I did, and I’m sorry, but it meant the feed got cut back in the UK so my family never got to hear me say this, so thank you for this second chance,” said Goldstein. “Mum, Dad, Tara and Matt, Zebby and Bo, I fucking love you.”

Here’s all the winners from this year’s Emmys, if you need to catch up.

NASA slammed DART spacecraft into an asteroid and filmed the crash