The world met them officially in 2003. Moving in with the Leding family in the small town of Altus, Arkansas, Paris Hilton and Nicole Richie were the first and only bimbos we aspired to be. Learning how to live with a middle-class family and adapt to the new environment, the duo made history on ‘The Simple Life’ as the first influencers of our time. Famous for the sake of being famous, Paris Hilton has since built an empire of perfumes, music, hair-and-beauty-products, amongst a slew of other business endeavors – all the while maintaining the un-embarrass-able, airhead persona she coined early on through her reality show. 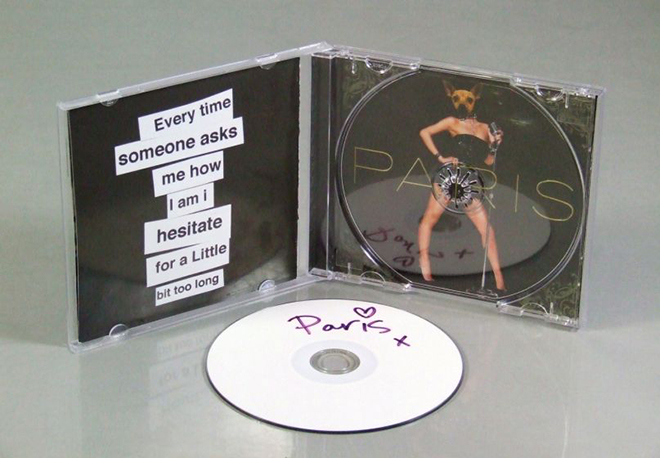 Reportedly worth an estimated $300 million, having not heard of Paris, is unheard of. As the great-granddaughter of Conrad Hilton, the founder of Hilton Hotels, Paris Hilton’s fanbase extends far and wide, even catching the attention of anonymous England-based street artist, political activist, and film director, Banksy. Known for his satirical street art and subversive epigrams which combine dark humor with graffiti and a distinctive stenciling technique, it wasn’t too long ago that Banksy “reinterpreted” the mogul’s debut album, Paris, with assistance from American musician, songwriter and record producer, Danger Mouse.

Remixing, renaming, and redesigning the album in its entirety, the Paris Hilton spoof record included tracks titled, “Why Am I Famous?”, “What Have I Done?” and “What Am I For?”, all of which, worked to comedically take a dig at the superstar’s public persona, resume and status. I suppose copyright infringement wouldn’t have worked in this case, since in 2006, 500 copies were placed in 48 record stores across the United Kingdom.

Considered a rare and highly coveted memento of 2000’s pop culture, the heavily sought after Paris Hilton CD just sold for £8,750 on TateWard Auctions – and many suspect the eager buyer to be the heiress, herself. Despite being mere speculation, the idea doesn’t seem too far fetched. In fact, when asked about the CD in an interview with Bustle, Paris was quick to applaud Banksy’s wit, stating, “Banksy is an iconic artist and I thought it was really cool that he would take that time to go and get 500 of my albums and do that to them. I’ve actually been trying to buy one. I’m trying to wait for another one [to become available] because they’re very limited edition. But I thought it was awesome that he did that.” 10 of The Best Airbnbs in Islamorada You Can Rent Right...

"He's SUCH a Liar!" Married at First Sight Couples React to... Love Is In The Air TikTok Cute Couple Goals Compilation –...

Two Artists Bring The Earliest Form of HeadGear Back in Style