Photographs from space are currently nothing like we’ve seen before.

With the James Webb Telescope taking unprecedented images of the deepest we’ve seen of the universe, the Hubble Telescope snapping colliding galaxies, NASA’s Mars rover Perseverance peering into new parts of the planet, and astrophotographers looking up just at the right time, astronomy photography is at its best right now.

And while we don’t all have a high-powered telescope or planetary rover to peer into the beyond, every year, on Earth, we rely on talented photographers to bring us a little closer to the skies — many of whom feature in the annual Astronomy Photographer of the Year competition.

London’s Royal Museums Greenwich has unveiled the finalists for this year’s batch. The astrophotography competition, which has been running for 14 years, received over 3,000 entries taken from 57 countries. The winners will be announced at an online ceremony on Sept. 15, and will be displayed in an exhibition at the National Maritime Museum in London from Sept. 17.

You can see them below, across nine categories including galaxies, stars and nebulae, aurorae, sun, moon, and more. We’ve added the photographers’ words under each image so you can know what you’re looking at.

And if you’d like to see previous years, here’s the finalists and winners from 2021. 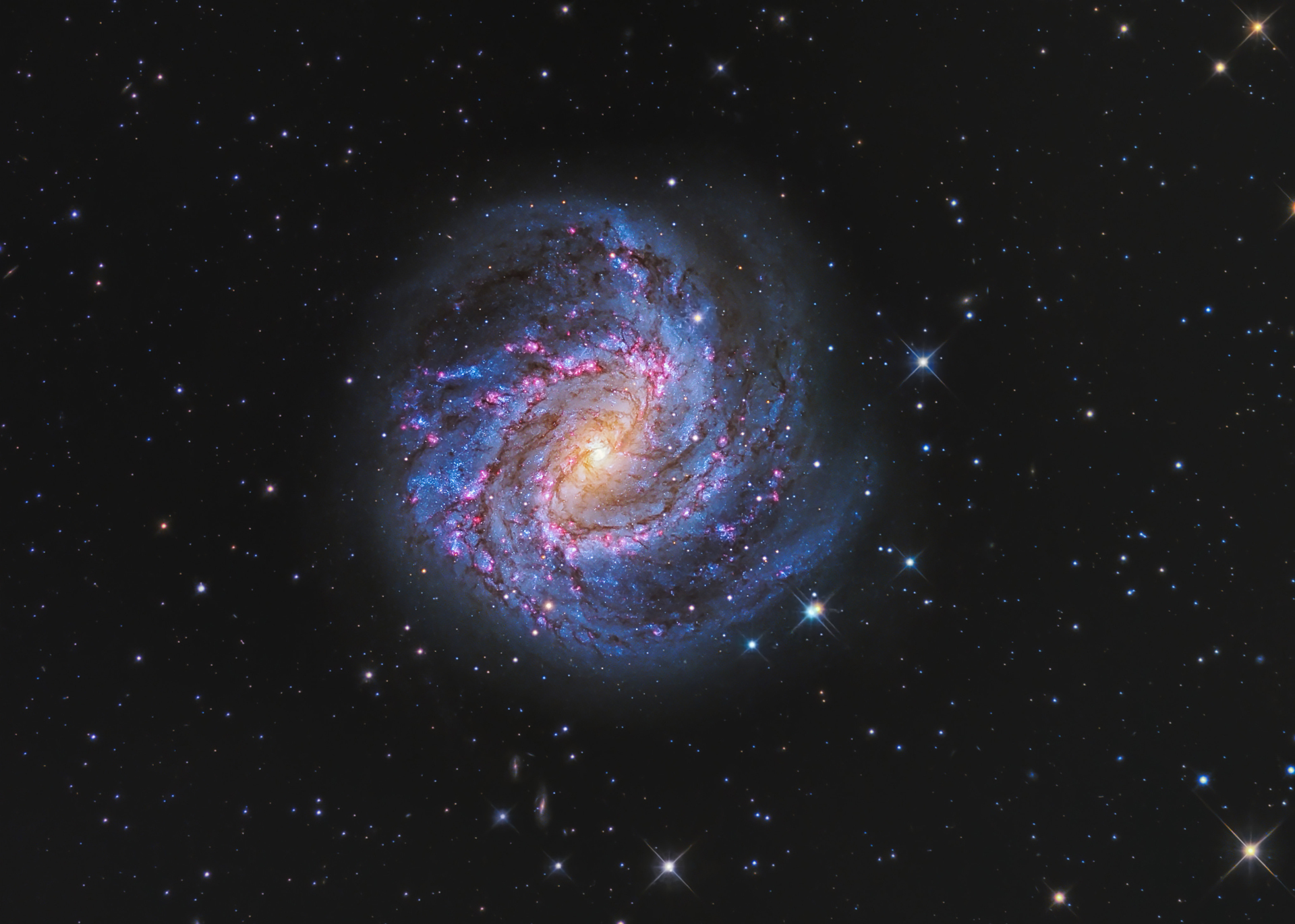 Nicolas-Louis de Lacaille first observed what later became known as the Southern Pinwheel Galaxy on 23 February 1752 from the Cape of Good Hope, South Africa. This image, taken exactly 270 years later, combines a deep set of H-alpha exposures along with colour data to highlight the ruby-like star-forming regions of this beautiful barred spiral galaxy. 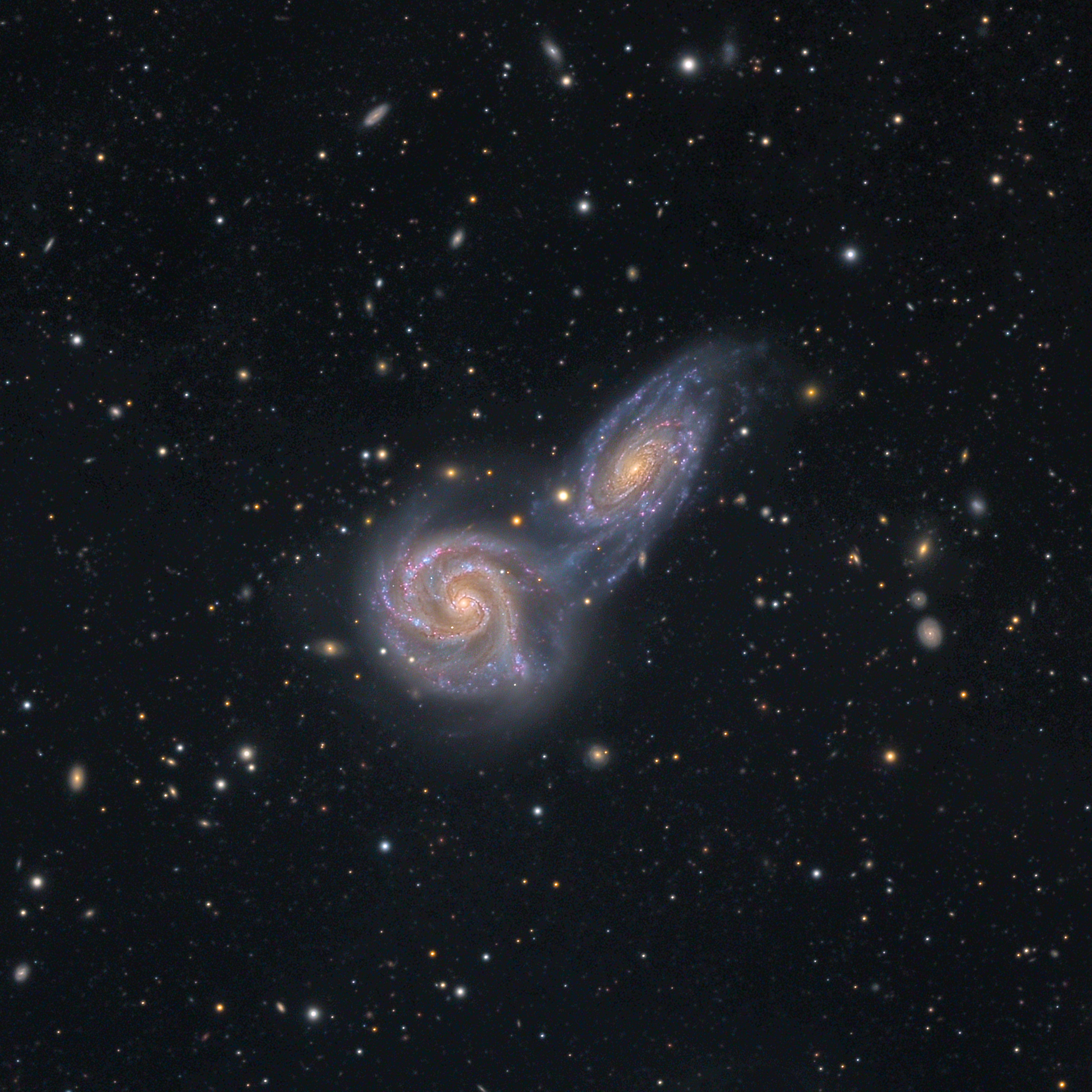 NGC 5426 and NGC 5427 are two spiral galaxies of similar size engaged in a major interaction. Known collectively as Arp 27, the interaction is expected to continue for tens of millions of years. 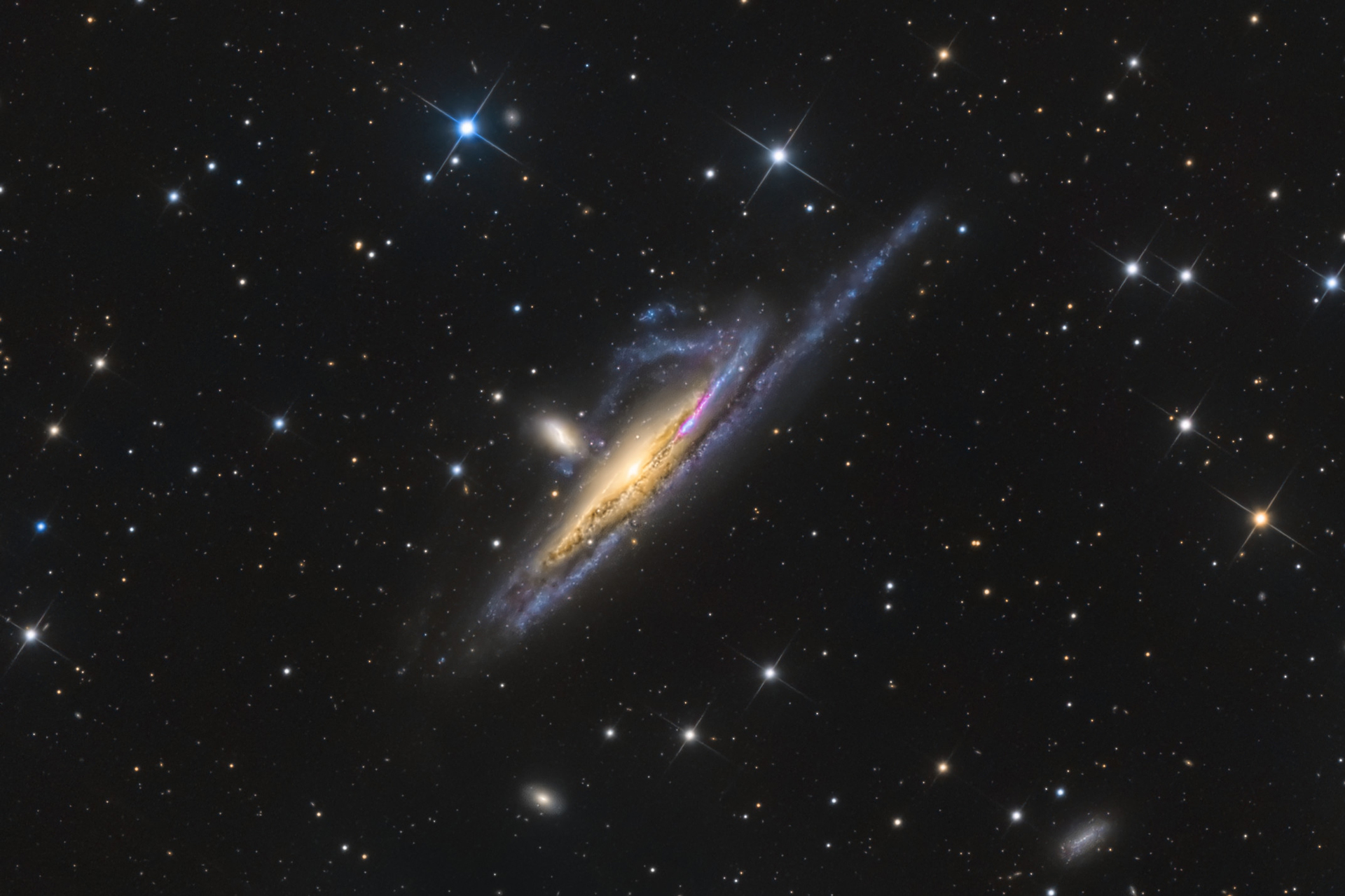 This pair of interacting galaxies are in the southern constellation of Eridanus (‘the River’). They are outlying members of the Fornax Cluster of galaxies. They are so close to one another that gravitational forces have distorted one of the spiral arms of the larger galaxy, NGC 1532. These forces have triggered bursts of star formation in both galaxies, but more so in NGC 1532, where a new generation of massive stars has been created. 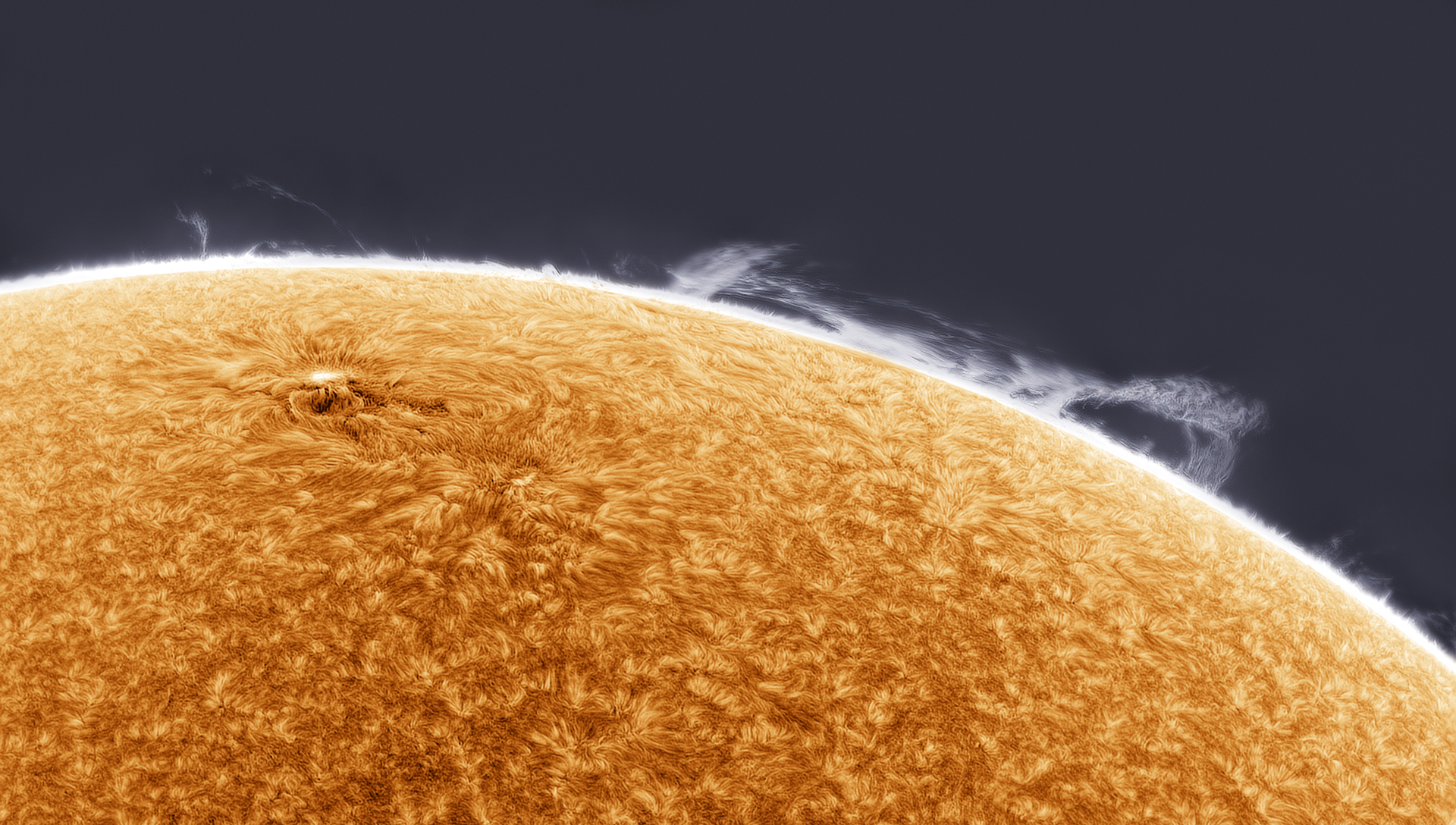 Clouds of hydrogen gas give way as the magnetic field lines of the sun snap and clash together. This display of nature creates astonishing features, known as prominences, on the limb of the Sun. 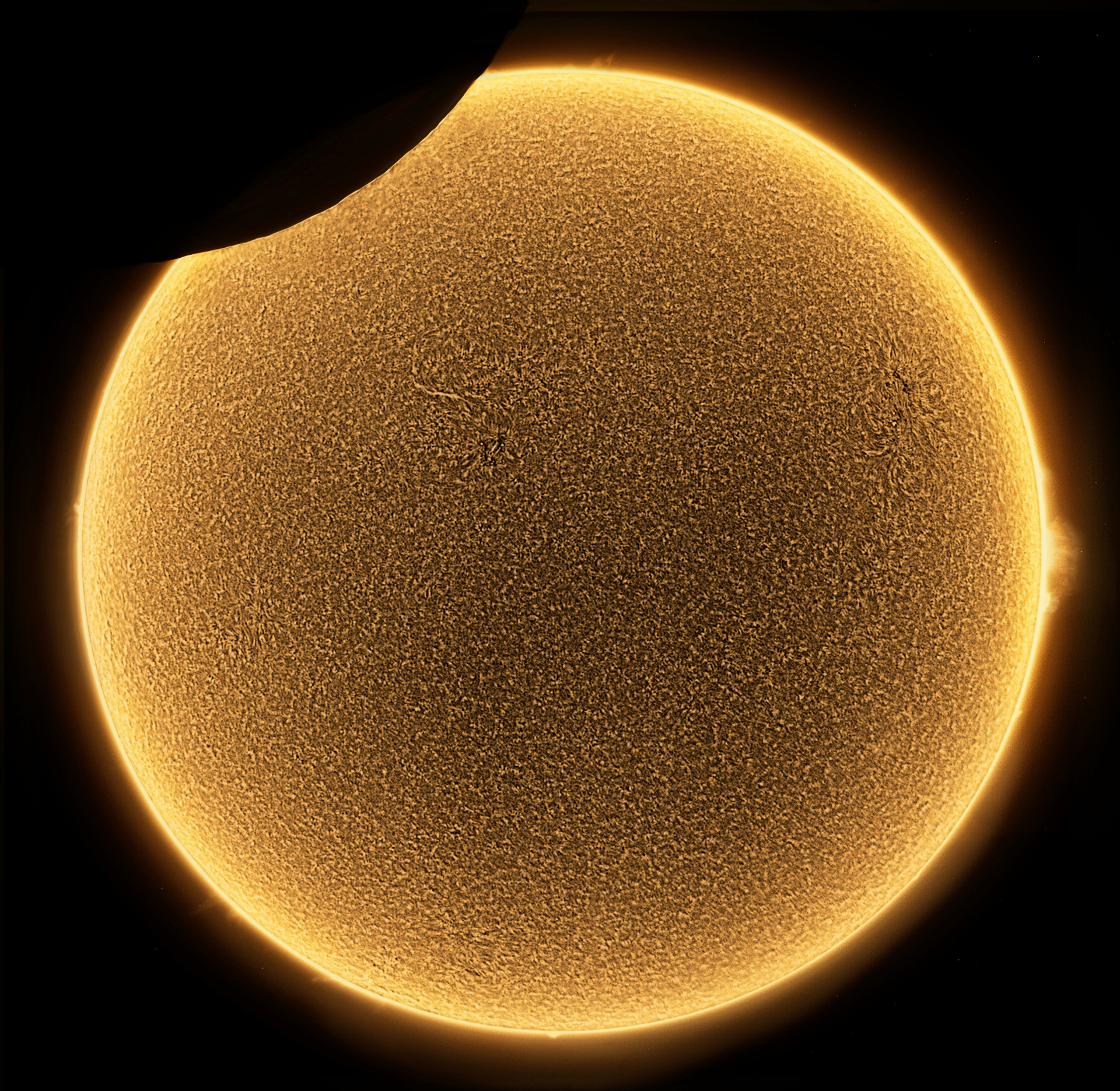 Partial Eclipse of the Sun in H-alpha
Credit: Alessandro Ravagnin

A partial eclipse of the Sun shot from the Veneto region of Italy as it reached its maximum on June 10, 2021. It was a day of low solar activity, which allowed for this crisp image of the Moon passing in front of the Sun. 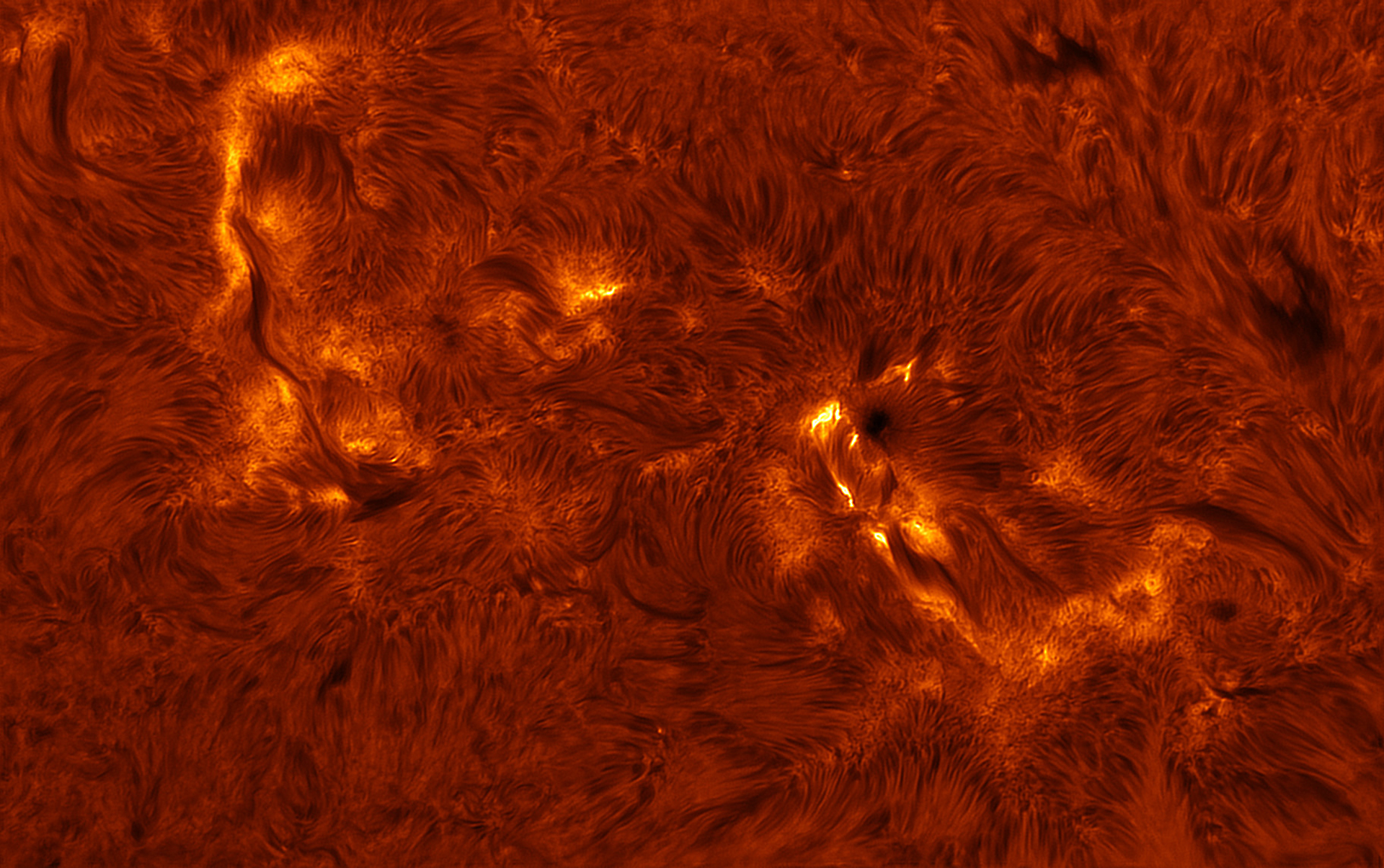 The Sun looks different every time astrophotographers capture an image as new sunspots form, grow and eventually fade away. The photographer selectively filtered out all wavelengths of light except a narrow red band (known as the H-alphaline) to reveal an active region of change of the Sun. 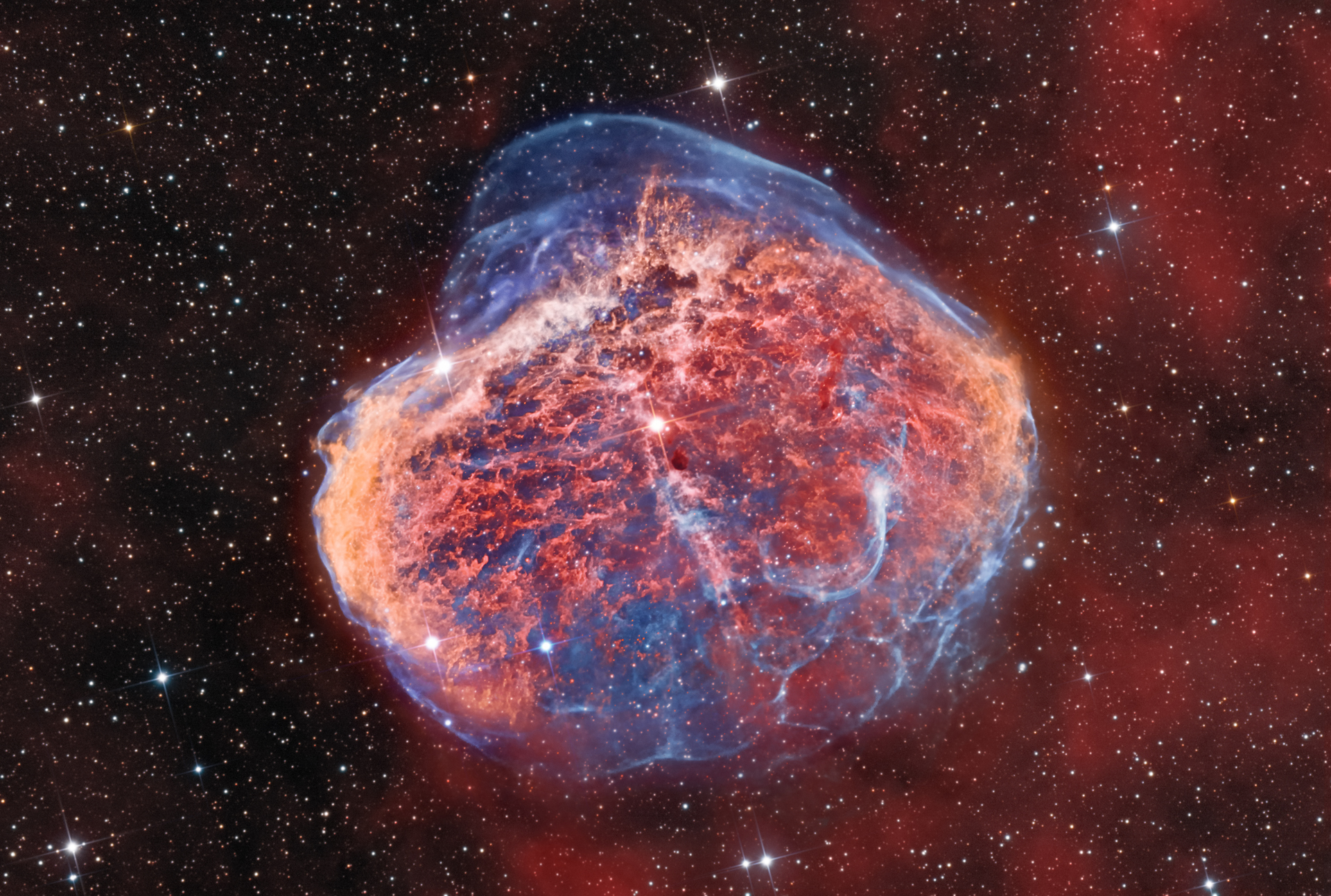 A deep view of the Crescent Nebula in Cygnus, the result of shockwaves originating from the Wolf–Rayet star WR 134. 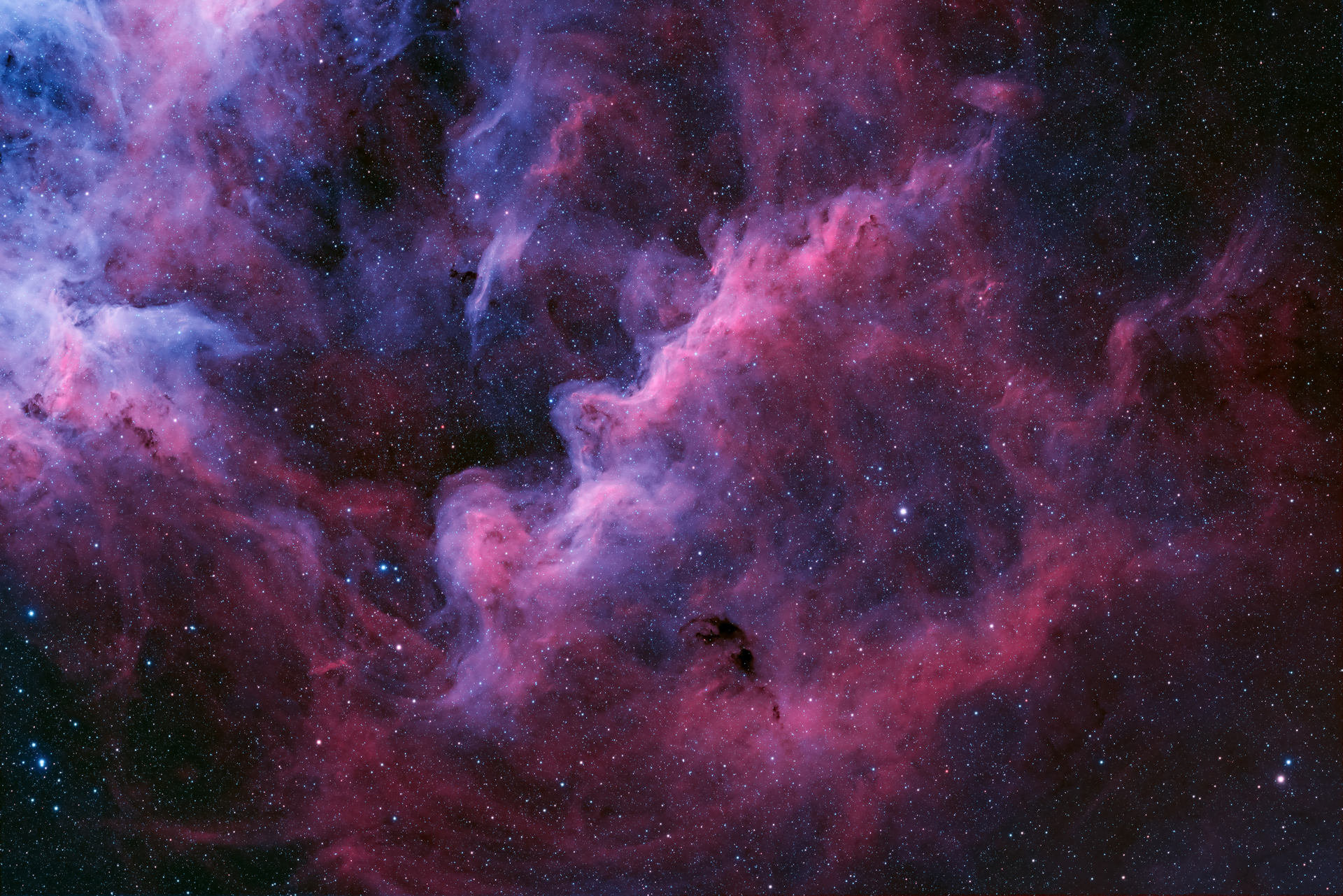 The main object in this image is a nebula catalogued as RCW 53c and seldom captured by astrophotographers. This image captures a region on the edge of the constellation Vela. The Vela Supernova Remnant is a very heavily imaged region, but this section is not commonly associated with the supernova remnant. It shows rich star colours and the strong presence of H-alpha and SII emissions. 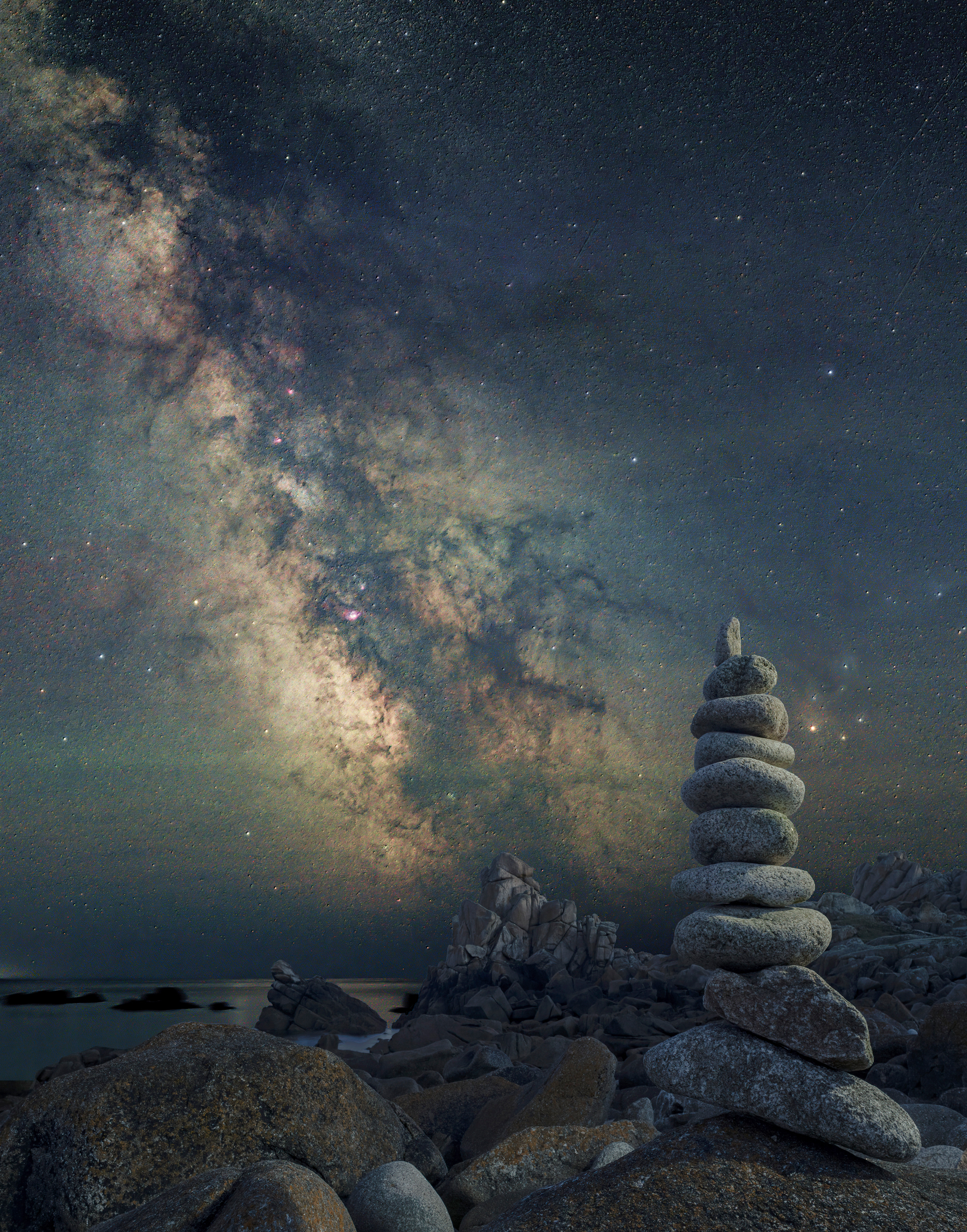 Stacking stones has had a practical use since prehistoric times, as a navigational tool to mark trails or territorial boundaries. Stacks are common on the beaches at St Agnes in the Isles of Scilly and provide an anchor for the Milky Way piercing through the night’s sky in this image. 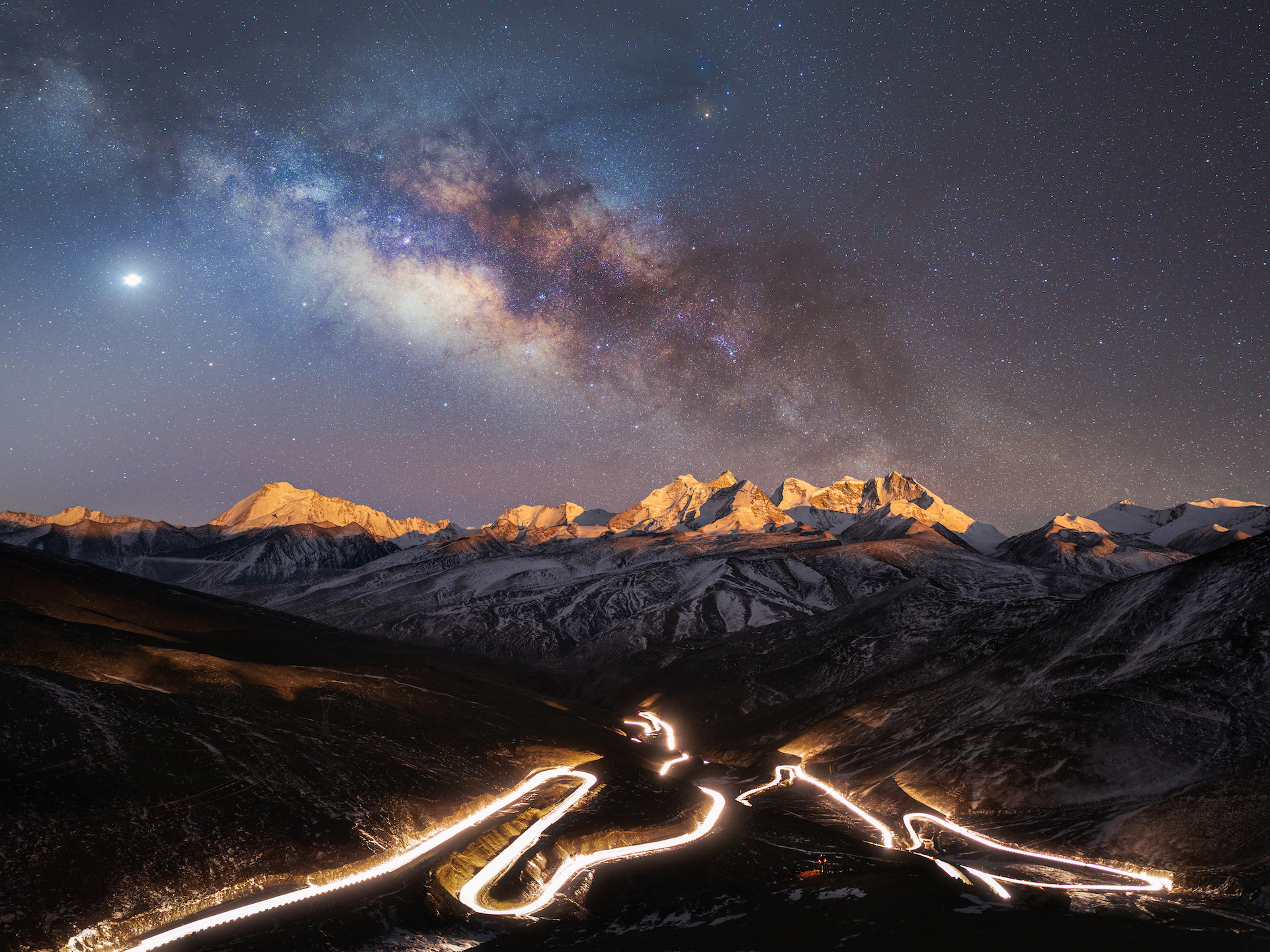 The illuminated National Highway 219, the highest national highway in the world, snakes through the foreground, almost mirroring the majestic image of the Milky Way above. The two are separated by Kula Kangri, a mountain located in Shannan Prefecture, Tibet. 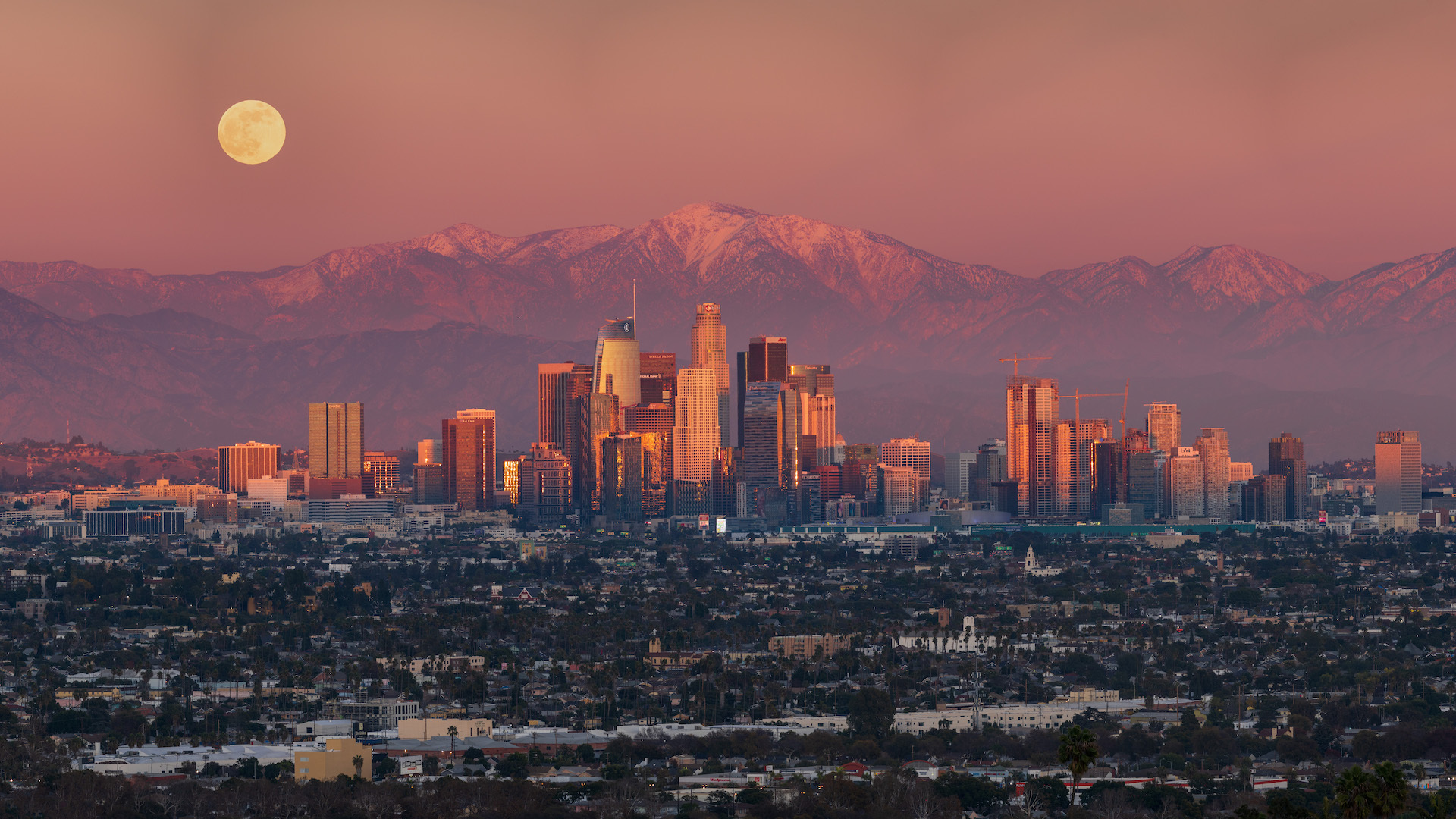 An alignment of the Moon, mountain and iconic skyline of Los Angeles following a winter storm on 18 December 2021. 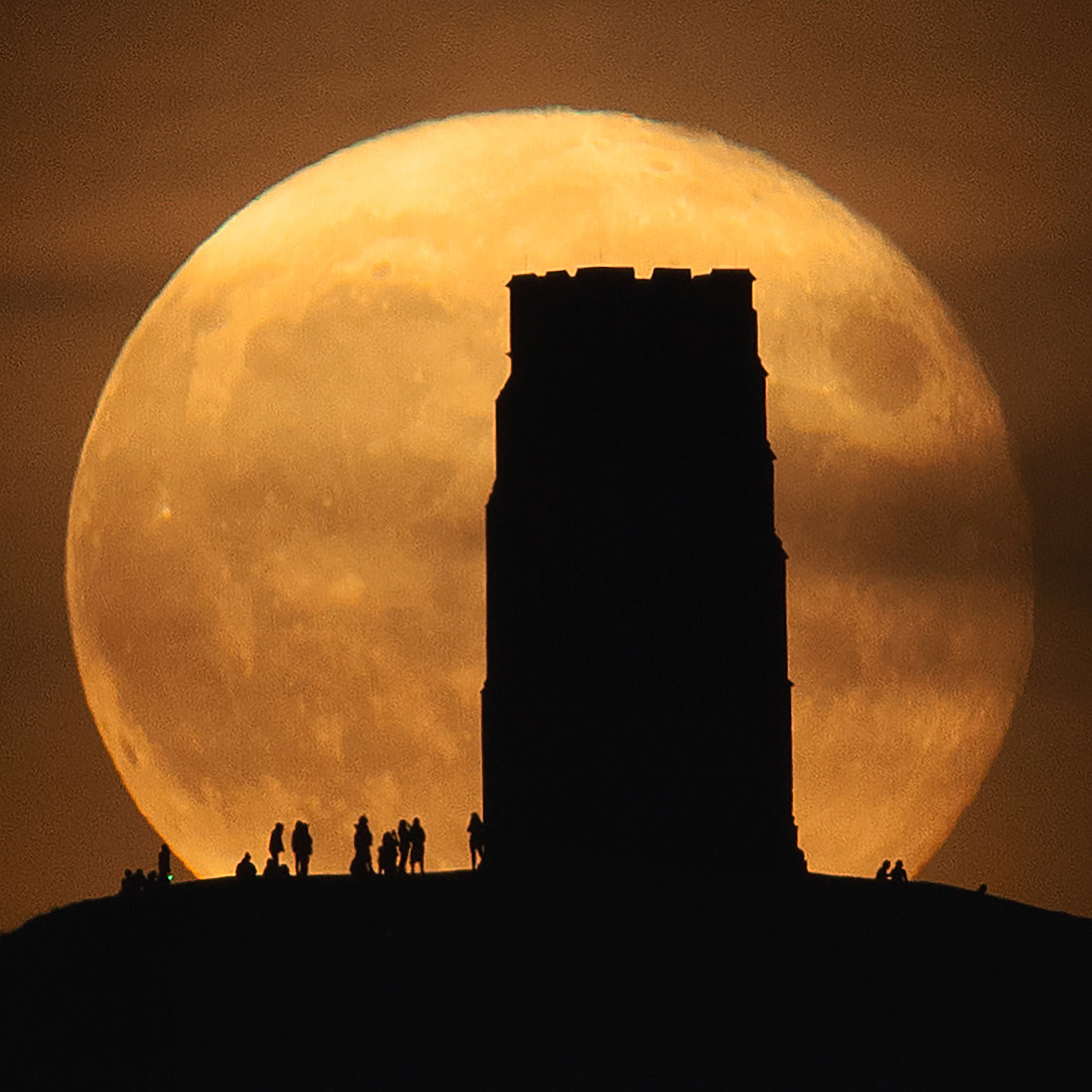 A single exposure captures people enjoying the full Harvest Moon rising behind Glastonbury Tor in the United Kingdom in September 2021. 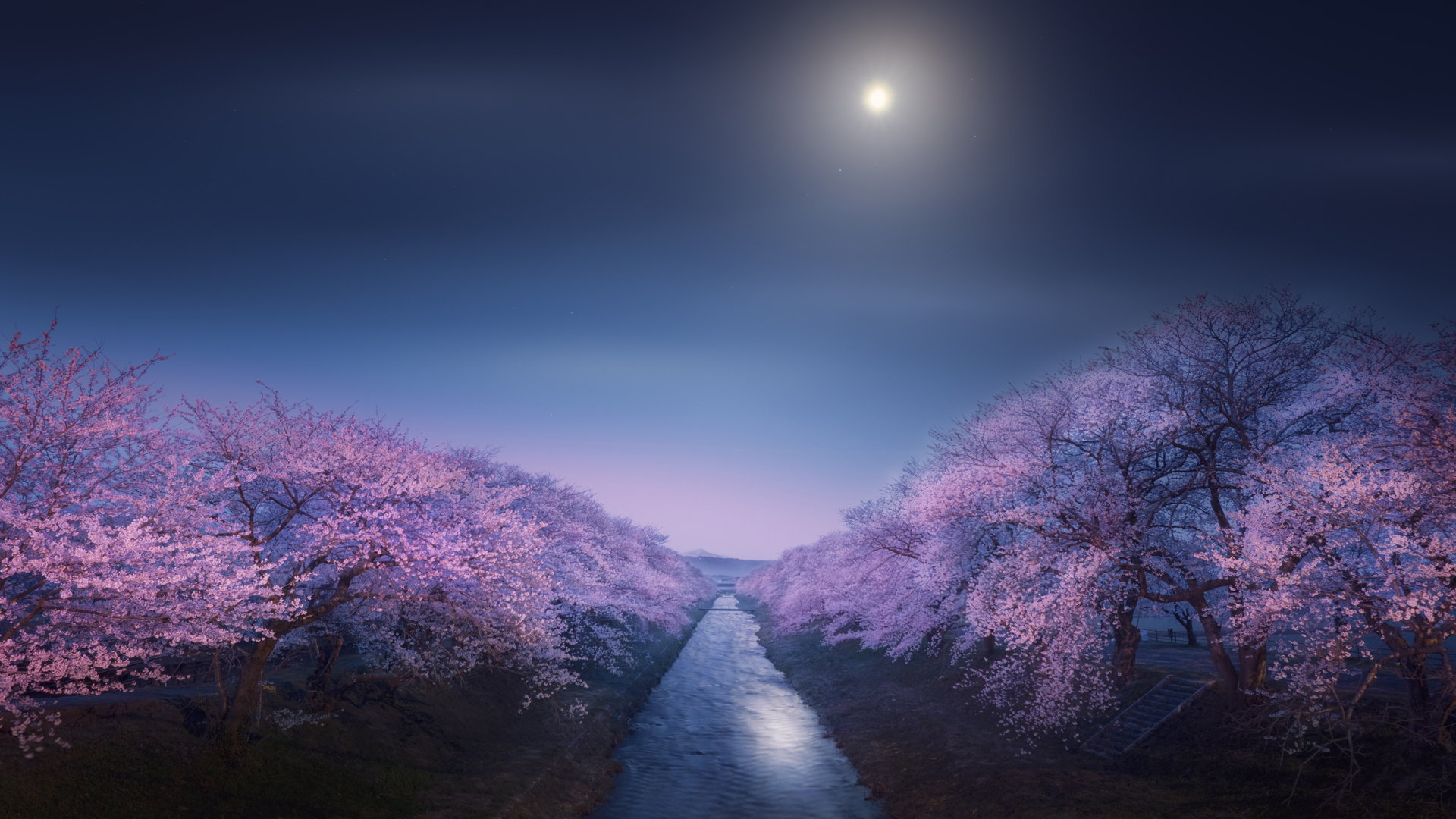 When the Funakawa River was renovated in 1957, approximately 280 Yoshino cherry trees were planted on both banks of the embankment. They draw the eyeline towards the distant horizon, into an inky blue sky with only the hazy moonlight breaking through the darkness. 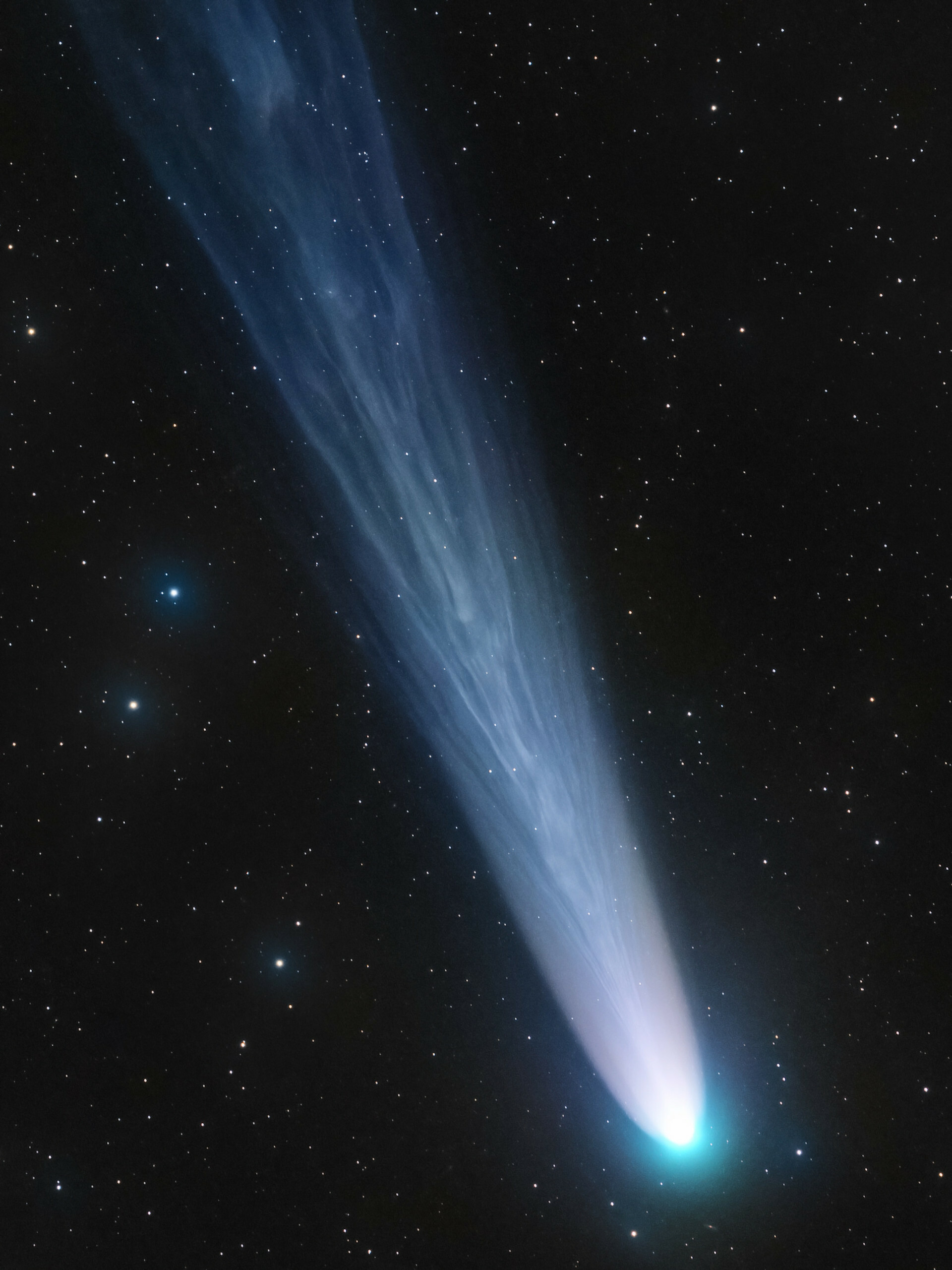 Comet Leonard was discovered by G.J. Leonard on Jan. 3, 2021 and made its closest pass to Earth on Dec. 12, 2021. The photographer secured some time with the robotic telescope at the Skygems Remote Observatories in Namibia on Dec. 27 to capture this rare glimpse of a comet that will leave the solar system and not be seen again. 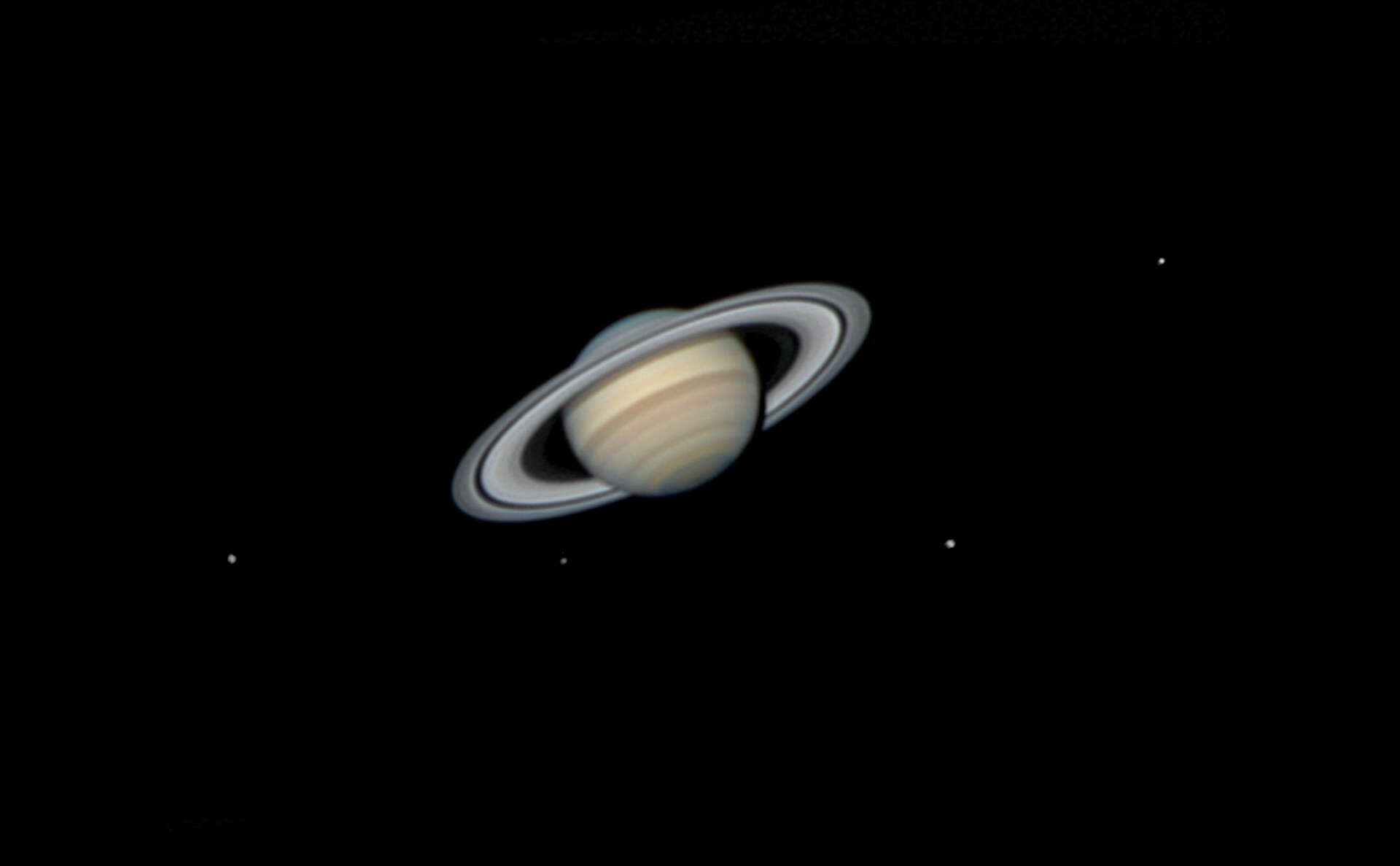 Saturn’s moons are distributed almost symmetrically around the planet, balancing the composition of the photograph. 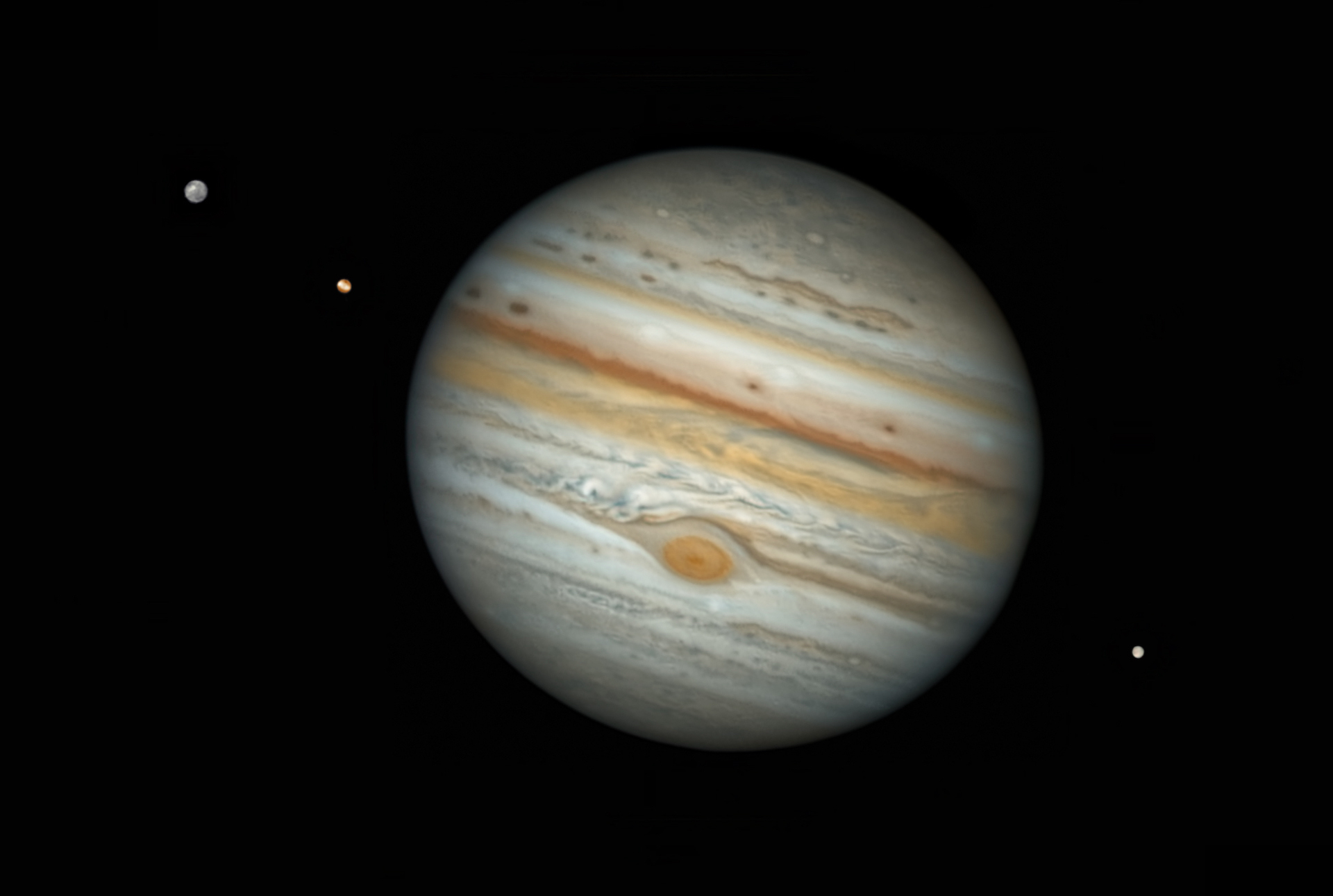 Jupiter captured with three of its largest moons. The famous Great Red Spot is visible on Jupiter itself, along with many other spots and storms. Similar details are also visible on all three of the Jovian moons. The bright ray crater Osiris can be seen clearly on Ganymede at the upper left. 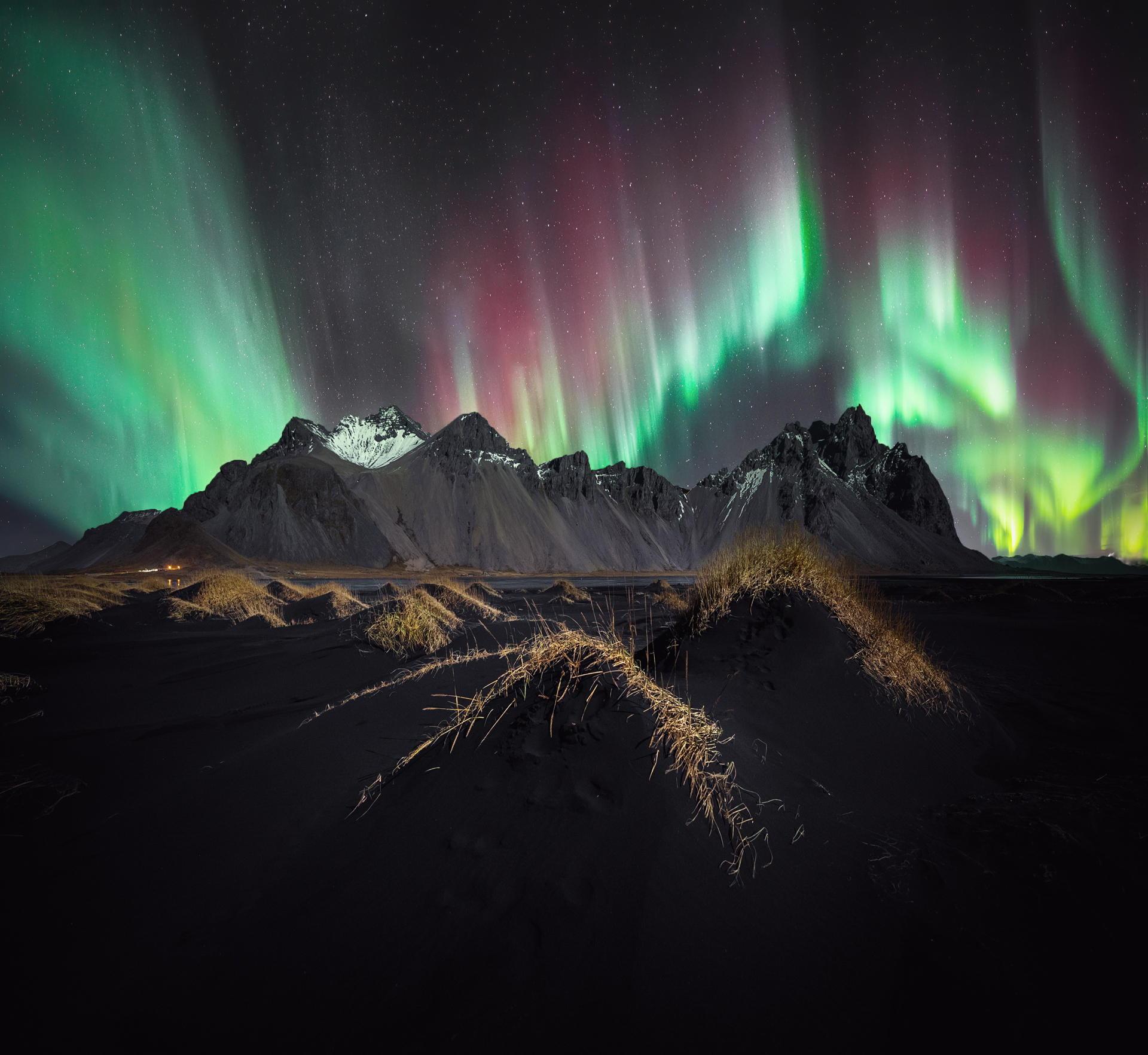 The Northern Lights over the famous Icelandic mountain, Vestrahorn. A panorama of three photos, processed with Lightroom and Photoshop. 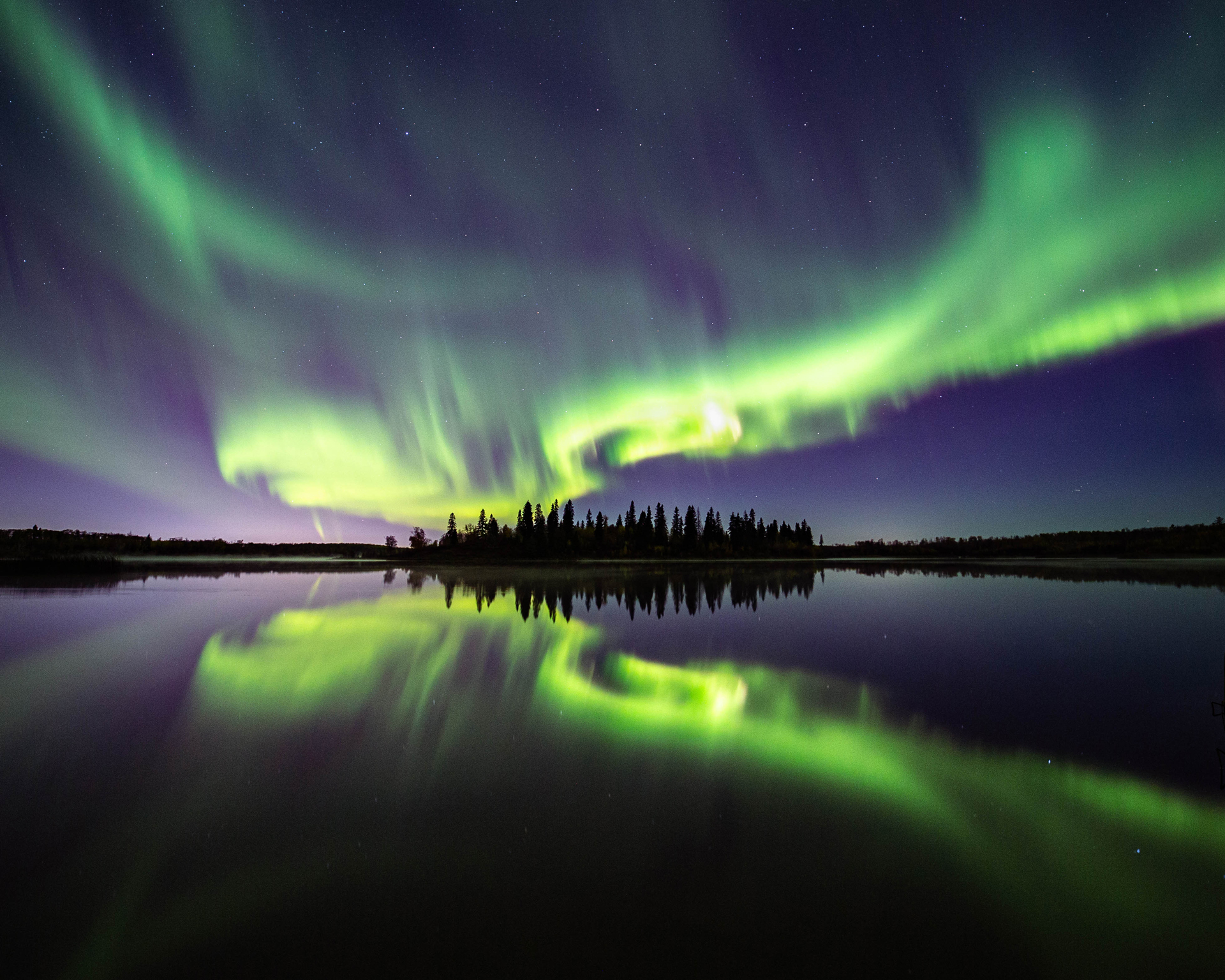 The Northern Lights are reflected in the still waters of a lake in Alberta, Canada. The photographer went on a nine-day, 2500-mile road trip, chasing gaps in the clouds, to capture the Aurora Borealis above the wreck of the Gardur in the Westfjords region of Iceland. 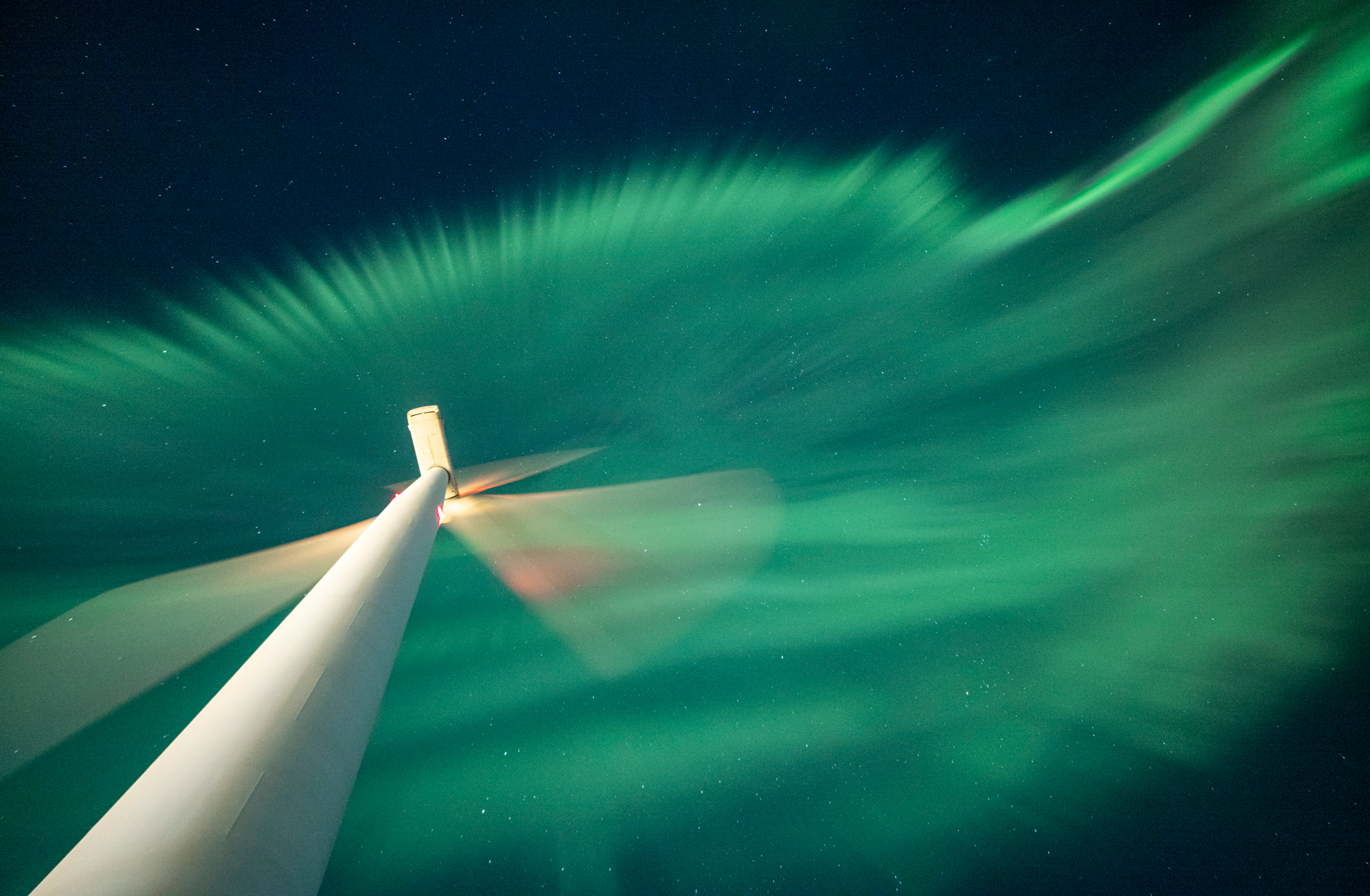 A vivid auroral corona behind the wind turbine gives the illusion of an interaction between the two, as if the turbine was driven by the solar wind or the turbine was dispersing the aurora. This was taken during a strong auroral storm in northern Finland. 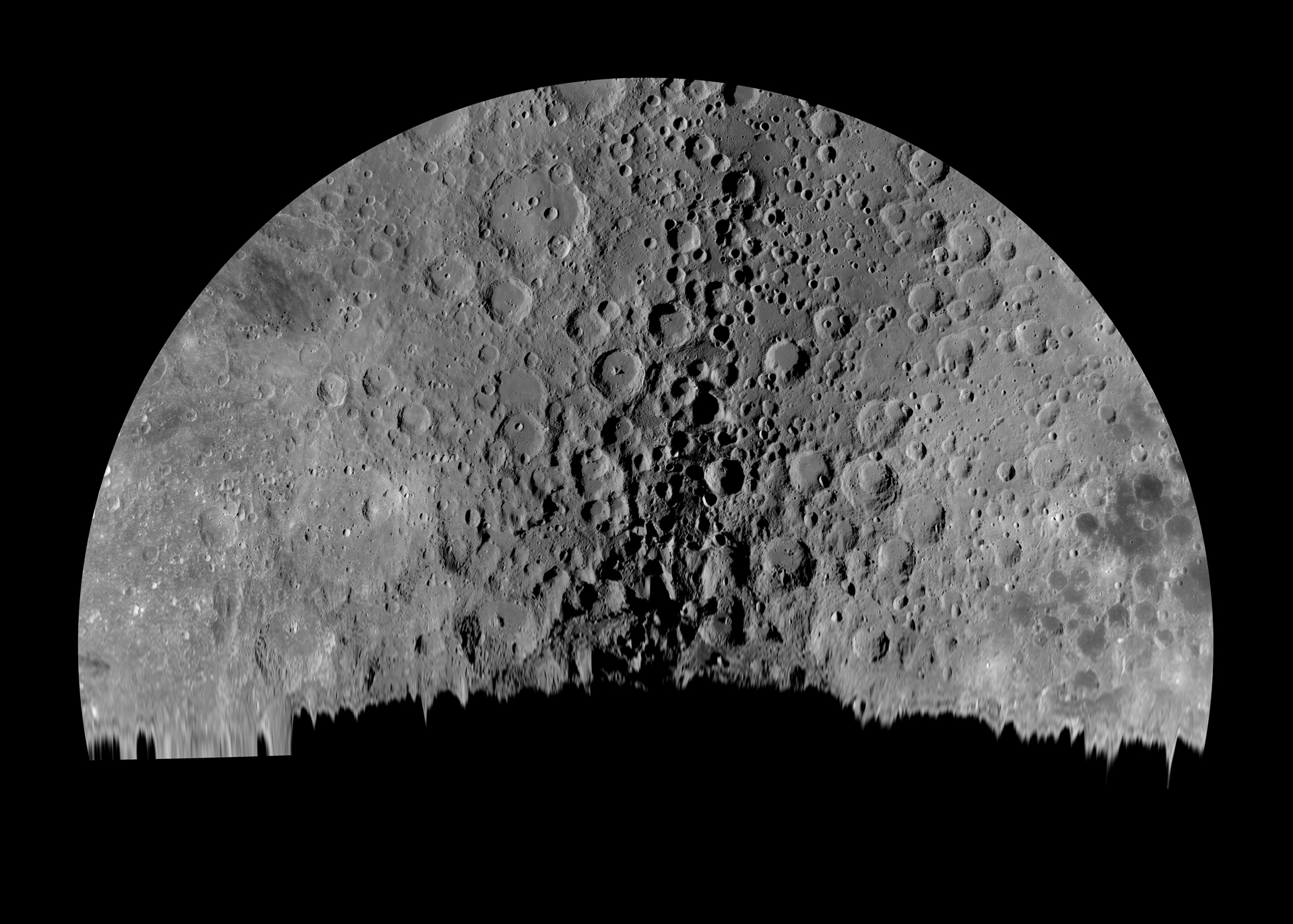 A composite of images of the lunar south pole created on two different dates (giving different views of the region). It one of the most detailed amateur-produced maps of this part of the moon, which is very difficult to observe from Earth.

Due to favourable libration, in this image you can see the craters and mountains at the lunar south pole, including the crater Bailly (with its discernible basin) on the right. Under Bailly are the craters Bettinus, Kircher and Wilson. The Montes Leibnitz are visible on the edge. 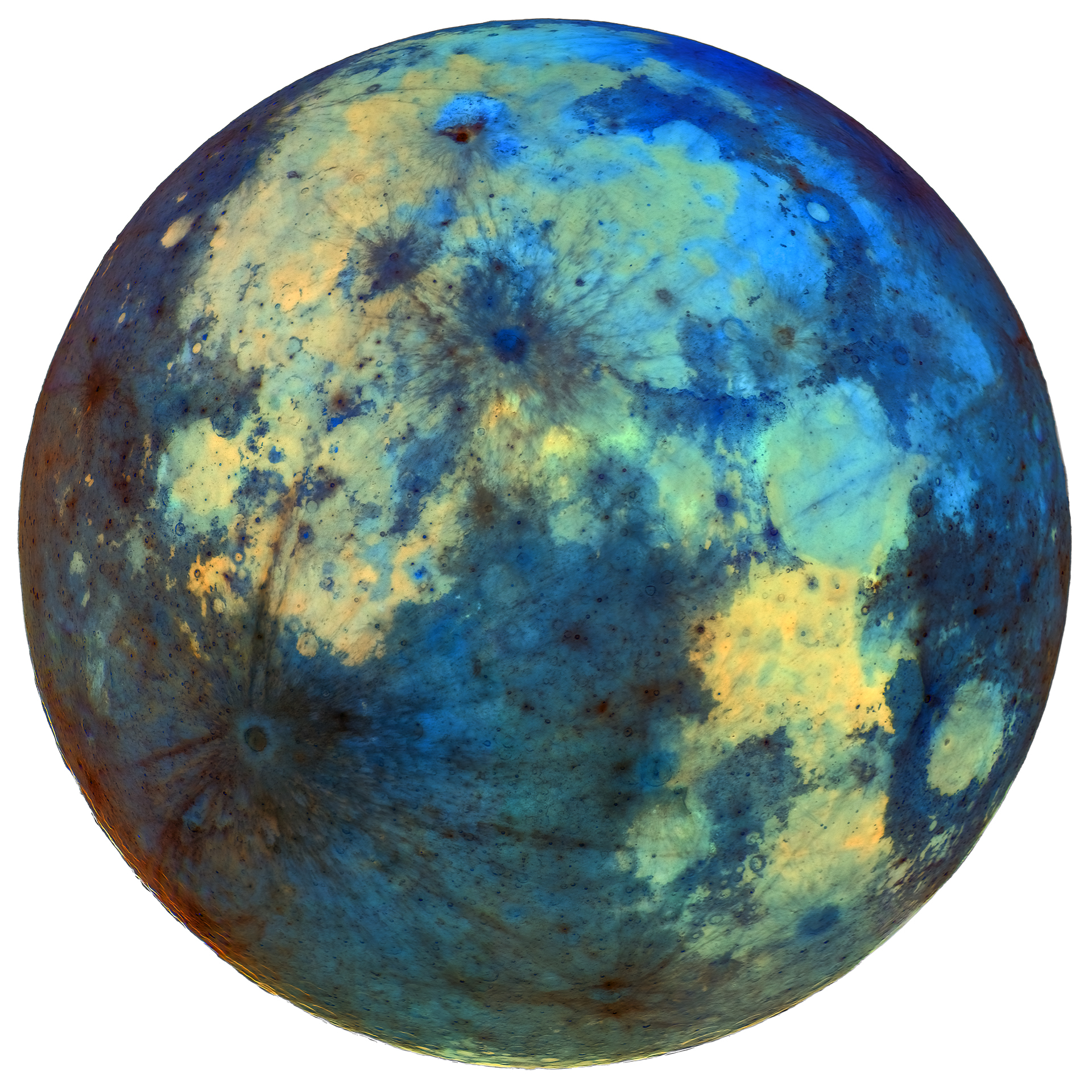 The lunar surface, although it appears grey and monochrome, contains hidden colours within the soil, caused by different minerals. This colour is too faint to see with the naked eye, but digital images allow astrophotographers to enhance the colours and reveal a different view of the moon. This image is the inverted view of those colours, a unique perspective on our moon. This massage gun is on sale for under $100

Start Living In A State of Higher Consciousness Now!

Brittney Griner Testifies in Russian Court as Her Case Continues